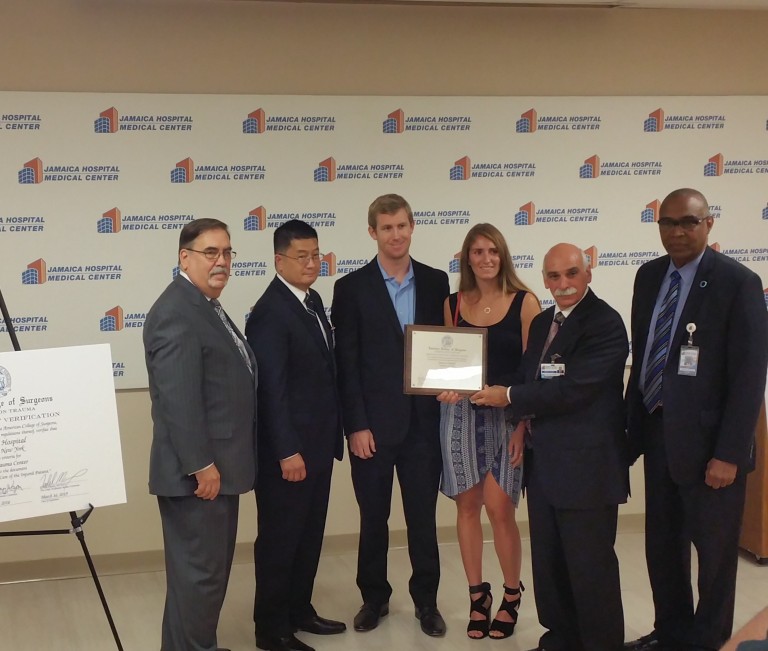 “It means that we can truly serve our community with the best of trauma care,” Canedo continued. “That’s our honor and privilege.”

Canedo was joined by Bruce Flanz, president and CEO of MediSys Health Network and JHMC, and the hospital’s trauma care team in announcing that JHMC received a perfect score on its trauma verification survey conducted by the American College of Surgeons. The accredited organization of experts in the trauma field reviewed Jamaica’s capabilities through an intense three-year audit, and verified that it meets the standards for Level I Trauma status – without a single deficiency.

“It’s the highest order of trauma center,” Canedo said. “It means that you should be able to handle the simplest and most complex of cases. Officer Healey was certainly a complex case.”

On Oct. 23, 2014, Healey and three fellow uniformed police officers – Joseph Meeker, Taylor Kraft, and Peter Rivera – were on a foot post on Jamaica Avenue near 162nd Street around 2 p.m. when they were approached by a freelance photographer who asked them to pose for a picture. As the officers obliged, a man identified as Zale Thompson, 32, charged at them with a hatchet in his hand. Unprovoked and not speaking a word, Thompson then swung the hatchet at Meeker, striking his right arm. Thompson, who later was characterized by Bratton as a “self-radicalized” Muslim, continued swinging the hatchet, striking Healey in his head, causing him to fall to the ground.

As Thompson continued his assault, Bratton said, Kraft and Rivera opened fire, killing him. Healey’s brothers in blue lifted him into a police vehicle and rushed him to nearby Jamaica Hospital, where he “received life-saving treatment from the Trauma Team” and remained in critical condition for days.

Healey survived his wounds and made it all the way back to the job last December. On NYPD Medal Day, he received the Medal of Honor, and his former 103rd Precinct colleagues Joseph Meeker, Taylor Kraft, and Peter Rivera earned the Combat Cross.

Jamaica has been a State-Designated Level 1 Trauma Center each year since 1987. According to JHMC, Healey is just one example of the more than 1,700 patients its Trauma Service treats annually, making it one of the busiest in the New York-Metropolitan Area.

Canedo told The Forum that JHMC definitely will rely on the new national trauma distinction when it applies for federal funding down the road. However, for now, it seems that Canedo and his colleagues are savoring a certain perfect score.

“It is, in our opinion, in our DNA,” Canedo said. “Our whole hospital responds to trauma.”