Bill Bratton left the NYPD on his own terms the second time around.

Bill Bratton, a bona fide legend of law enforcement, retired following a 45-year career in public service – including two stints as New York City police commissioner under two (very) different mayors. He now embarks on a new opportunity in the private sector with the international consulting firm Teneo Holdings. Bratton will join the firm as senior managing director and executive chairman of Teneo Risk – a new division of the firm focused on advising clients on key risk identification, prevention, and response. 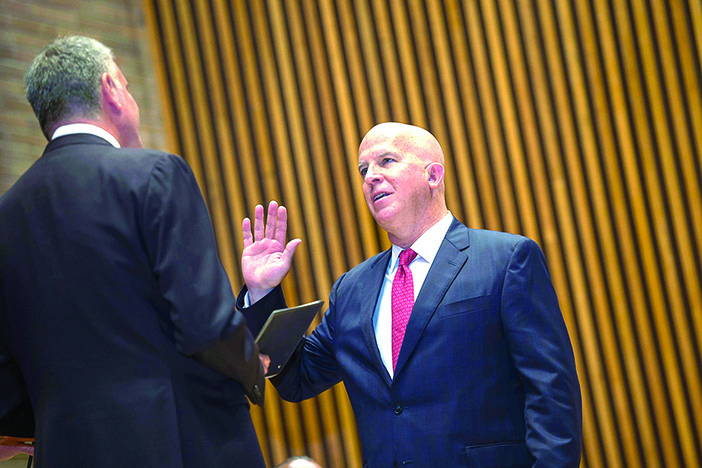 Career cop James O’Neill beams as he is sworn in as the City’s 43rd Police commissioner.

“Serving as police commissioner during your administration has been one of the great honors of my life, and as I tender this resignation I also tender my thanks,” Bratton wrote in his official resignation letter to Mayor Bill de Blasio. “In leading six different police departments across the country in the past 35 years, I have never been better resourced or more fully supported by any mayor. From equipment, to training, to technology, to policy, to the first substantive headcount expansion in more than a decade, you have stood by the NYPD and made much of what we have accomplished possible.”

In the same thorough missive, Bratton acknowledged his successor at 1 Police Plaza.

“You have left all of these initiatives in the best possible hands by appointing Jim O’Neill as my successor,” he said. “I am confident that you will have as productive a collaboration with Jim as you have had with me.”

O’Neill had served previously as chief of department, the NYPD’s highest uniformed rank. By all accounts a cop’s cop, the Brooklyn native has been widely credited with developing the neighborhood-based policing model that aims to foster greater police and community interaction and collaboration.

O’Neill began his law-enforcement career in 1983 with the Transit Police, which was then an independent police department. The married father of two sons has said that he credits his time on patrol on the trains and platforms of the subway system with helping him learn how to interact and communicate with a wide range of people, a skill he regards as essential to successful police work.

“With cops and community together, we will continue to be a city that bucks the negative crime trends prevalent elsewhere, a city that embraces its differences and its similarities, a city that keeps thriving, and a city that’s a model of success for the rest of America and for the world,” O’Neill wrote in a message to the men and women of the NYPD. “I am privileged and eager to move forward with all of you.”

“As the highest ranking uniformed member of service, I’ll continue with our efforts to reduce crime, expand our counterterrorism efforts, support our officers, and improve community relations,” Gomez said on Tuesday at his swearing-in ceremony. “In the last two decades, we’ve seen a dramatic transformation in New York City…a transformation for the better.”