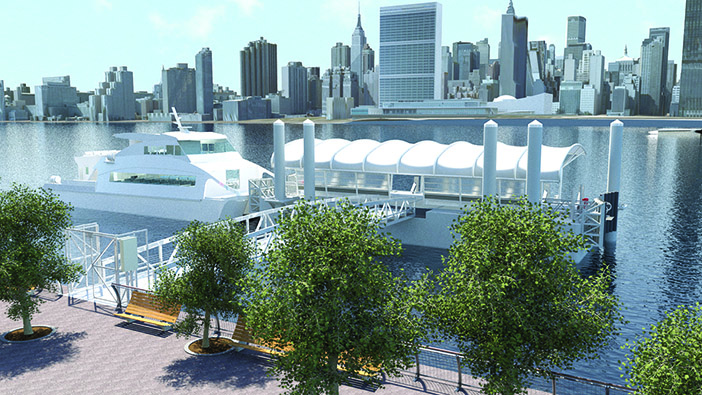 The LIC North ferry landing at Gantry Park is projected to have the highest ridership outside of Manhattan, estimated to service approximately 4,000 daily trips.

The Citywide Ferry landing for Long Island City North will be located off of Center Boulevard in Gantry Plaza State Park, the City Economic Development Corporation announced this week.

“The Citywide Ferry is a much-needed service to address some of the transit shortfalls in Queens. The Long Island City landing spot will be a boon for residents and businesses of the fastest growing neighborhood in New York City,” said Queens Borough President Melinda Katz. “Our challenge in government has been to help ensure infrastructure keeps up with demand, and we’re pleased the project is on track to launch next year.”

The LIC North ferry landing, according to EDC, is part of the route which is scheduled to launch next summer.

“Citywide Ferry Service will provide increased transportation options for commuters in Western Queens—and the cost of a boat ride to Midtown or Wall Street will be the same as a trip on the subway,” said City Council Majority Leader Jimmy Van Bramer (D-Sunnyside). “All five boroughs will be better connected because of this new initiative. Long Island City is growing rapidly, and its residents need a variety of transportation options. I’m thrilled to announce this location and expand Citywide Ferry Service in our neighborhoods.”

EDC indicated that the current ferry landing in Hunters Point South will continue to be part of East River Ferry operations until its integration into the larger Citywide Ferry Service network in 2017.

“Community Board 2 would like to thank the EDC as well as our elected officials for bringing the new ferry landing to Long Island City. This ferry landing is a welcome addition to our growing transportation needs and is an excellent alternative for residents and consumers that use our subway and bus lines,” said Community Board 2 Chairwoman Denise Keehan-Smith. “We look forward to working with EDC in the future as they consider additional locations as our population continues to grow. Providing efficient transportation to and from the area is a critical need and we believe this addition is a step in the right direction.”

Mayor Bill de Blasio announced in March that the seaborne service is on track for a 2017 start date. The Phase I Rockaway, Astoria, and south Brooklyn routes will be ready for the first 2017 voyages. When fully operational by 2018, the Citywide Ferry Service will carry an estimated 4.6 million trips per year across six routes.

The plan still is for the ferry to be pegged to the price of a MetroCard, and launch at $2.75 per trip. The project is expected to cost approximately $325 million. The City has said that it is investing $55 million in infrastructure upgrades, including building 10 new ferry landings and rehabilitating six others; and that it is also providing $30 million in operating support per year, over a period of six years.