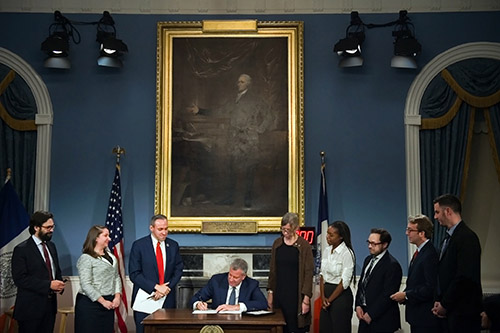 U.S. Sens. Charles Schumer and Kirsten Gillibrand (both D-N.Y.) and Mayor Bill de Blasio last week announced $46,965,661 in federal funding for the City Office of Management and Budget on behalf of the NYC Department of Parks and Recreation for repairs to three buildings containing public services for the beaches in Rockaway.

OMB will also be reimbursed for repairs made to four boardwalk sections, known as “entry islands,” which provide public access to the beaches, according to the elected officials. The facilities were damaged as a result of Superstorm Sandy and repairs were necessary in order for Rockaway’s beaches to open up in time for the summer after the storm.

“Rockaway is home to some of the best beaches in New York City and when Superstorm Sandy wreaked havoc on the community, New York City worked hard to make sure public access areas and damaged facilities were repaired in time for the summer season,” Schumer said. “This federal funding will help make sure local taxpayers are not entirely on the hook for the repairs made to Rockaway’s beaches after Superstorm Sandy.”

The funding is being provided through the Federal Emergency Management Agency’s hazard mitigation program. The purpose of these grants is to reduce the loss of life and property due to natural disasters and to enable mitigation measures to be implemented during the immediate recovery from a disaster. Normally, without these grants, FEMA will only provide enough funds for a locality to rebuild using the same specifications as the original structure.

“Four years ago, Hurricane Sandy devastated the Rockaways and other parts of the city, highlighting a growing vulnerability across our coastline to storms and the growing impacts of climate change,” said Daniel Zarrilli, senior director for Climate Policy and Programs and Chief Resilience Officer in the NYC Mayor’s Office. “Today’s announcement marks another step in our recovery as we work to ensure the Rockaways and neighborhoods across the city are ready to withstand and emerge stronger from climate impacts. Thanks to Senators Schumer and Gillibrand for helping New Yorkers with the support we need to continue building a more sustainable, resilient, and equitable city.”

Gillibrand added, “I am pleased New York City will get this federal funding to help cover the cost of repairing several boardwalk sections at Rockaway Beach damaged by Superstorm Sandy. This critical FEMA funding will help provide much needed resources on the ground as recovery efforts continue. I will continue to fight for funding so we can rebuild even stronger and be ready for when the next storm hits.”

“I’m hoping that this is not money being diverted from any essential programs which may already be in place,” Ruscillo added. “Hey, we all as tax payers in New York City like a break with federal money – however this is not clear on just where and what this money is being spent on.”