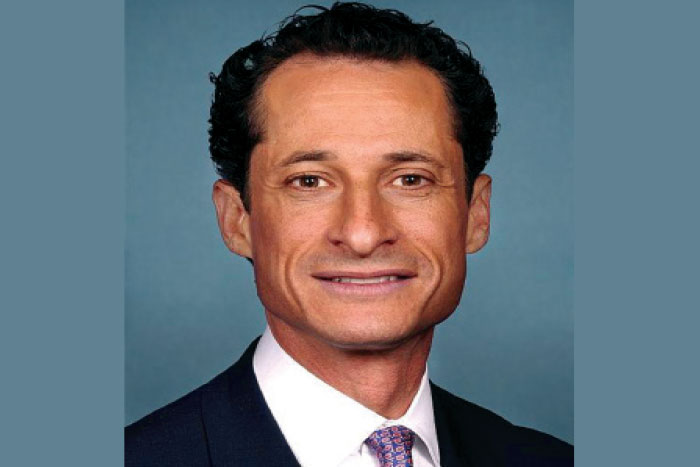 Anthony Weiner, meet Rock Bottom.
Rock Bottom, Anthony Weiner.
The former seven-term congressman on Friday in Manhattan federal court was charged with, and pleaded guilty to, one count of transferring obscenity to a minor. Though the charge carries a maximum sentence of 10 years in prison, Weiner is likely facing anywhere from 21 to 27 months in a federal correctional facility. Upon his release, he also will have to register as a sex offender.
Some may say that the one-time mayoral hopeful and wunderkind of the Democratic party was first introduced to his Rock Bottom back in January 2016, when, in his own words, Weiner “was contacted by and began exchanging online messages with a stranger who said that she was a high school student and who I understood to be 15 years old. Through approximately March 2016, I engaged in obscene communications with this teenager, including sharing explicit images and encouraging her to engage in sexually explicit conduct, just as I had done and continued to do with adult women. I knew this was as morally wrong as it was unlawful.”
Regardless of when you believe Weiner initially exchanged pleasantries with his moral basement, we all can agree that, after listening to a deservedly humiliated man describe in that courtroom on Friday how he texted inappropriate images to a 15-year-old girl, the world came face-to-face with the abrupt and loud end of the joke.
The tabloid headlines screaming the latest Weiner/male anatomy pun are in our collective rear-view mirror. It’s serious now. We’ve jarringly departed from the double entendres and the envelope-pushing dick jokes and crash-landed onto the lonely island of a legitimate sexual deviant who not long ago was paid $200,000 a year to represent our interests in our nation’s capital.
Perhaps the most chilling aspect of the announcement of Weiner’s plea agreement is these words from acting Manhattan U.S. Attorney Joon Kim: “…with a minor girl HE KNEW to be 15 years old…”
On Friday, Weiner apologized to…everyone.
“This fall, I came to grips for the first time with the depths of my sickness. I had hit bottom. I entered intensive treatment, found the strength to take a moral inventory of my defects, and began a program of recovery and mental health treatment that I continue to follow every day,” he said. “I accept full responsibility for my conduct. I have a sickness, but I do not have an excuse. I apologize to everyone I have hurt. I apologize to the teenage girl, whom I mistreated so badly. I am committed to making amends to all those I have harmed. Thank you.”
Weiner’s legendary performances on the Hill, his seemingly daily jousts with (insert any Fox News host’s name here) are, like the once shrewd politician, a distant memory now that can be recalled on YouTube.
In one clip, Weiner’s former colleague, U.S. Rep. Jerrold Nadler (D-Brooklyn, Manhattan), introduces him on the House floor so Weiner can have his remarks on the public record.
“Mr. Speaker, I yield one minute to the distinguished gentleman from New York, Mr. Weiner.”