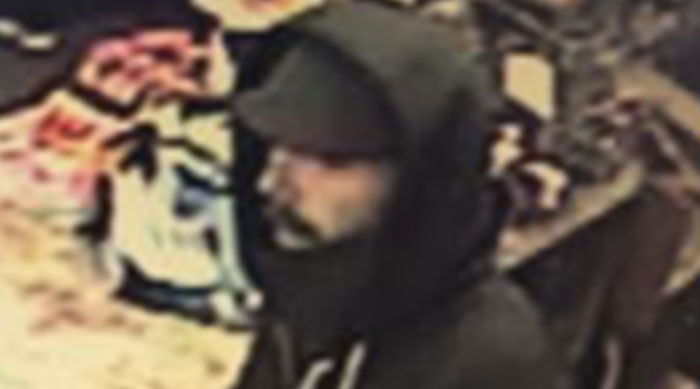 The perpetrator’s actions were caught on the store’s surveillance cameras.

By Michael V. Cusenza
City Police Department detectives this week reached out to the public for help in identifying a suspect wanted for questioning in connection to the bold gunpoint robbery of a Middle Village convenience store last month that was caught on surveillance footage.
According to police reports, the man entered the Quick Stop Deli on Eliot Avenue and 85th Street on Saturday, June 17, around 4:15 p.m., and proceeded to walk behind the counter while displaying a firearm in his right hand. The suspect then ordered the 45-year old male employee to remove the contents of the register; the employee complied and the suspect fled on foot southbound on 85th street with approximately $1,600 stuffed into various pockets.
The perpetrators is described as a white man with a slim build and sporting a mustache; he was last seen wearing a dark hat, dark hooded jacket and dark jeans.
Anyone with information is asked to call the NYPD’s Crime Stoppers Hotline at (800) 577-TIPS (8477) or for Spanish, (888) 57-PISTA (74782). The public can also submit info by logging onto NYPDCrimestoppers.com or by texting their tips to 274637 (CRIMES) then enter TIP577. All correspondences are strictly confidential.