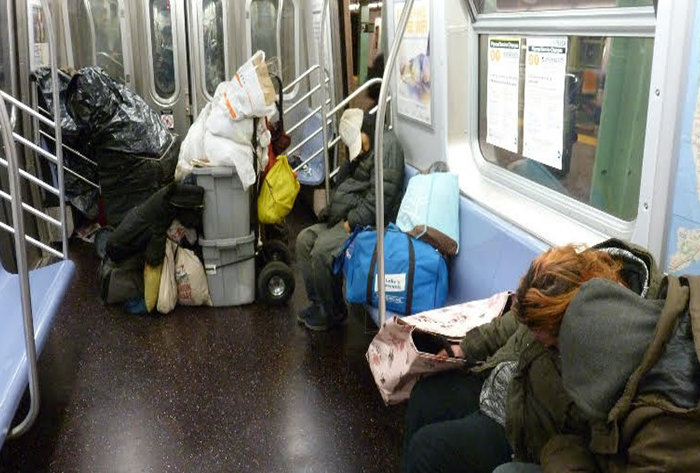 Mayor de Blasio caught plenty of heat this week for his initial response to how to address the issue of homeless people on trains.

By Michael V. Cusenza
A photo recently published by the New York Post showing a homeless man sound asleep underneath a row of seats in a 3-train car, and Mayor Bill de Blasio’s initial response to said image, sparked a furor that saw critics blast Hizzoner for deflecting blame for the growing problem.
“It’s not acceptable for people to sleep on a subway train like that,” de Blasio said on Sunday, the Post wrote, adding that “there are particular rules related to the MTA that give additional enforcement ability to the NYPD.”
On Monday, Metropolitan Transportation Authority Chairman Joe Lhota called out de Blasio.
“The mayor was asked about the homeless sleeping on the subways and one of his first words in response was ‘MTA.’ New Yorkers get the mayor is making every attempt to distance himself from the Transit Authority, but they aren’t fools,” Lhota said. “The fact is that since 1995 the NYPD has been the police force charged with enforcement in the subway system. The MTA board gave Mayor Giuliani the authority to consolidate the Transit Police within the NYPD, giving the City primary jurisdiction. That’s a fact. Recently, the MTA has repeatedly asked the NYPD to help the expanding number of homeless people in the system find shelter outside of the trains and stations. The NYPD needs to enhance its homeless outreach efforts in the subways. We all know that homeless people need help; clean shelters, job training, mental health services, and leaving them on the trains is degrading for all. The response is not to defend or excuse the presence of the homeless, but to get them the help they desperately need. Every New York City mayor since Koch has realized this except our current mayor. We again are asking the NYPD to step up their presence and increase enforcement and the City must stop running from its responsibility.”
The City Police Department quickly responded to Lhota’s statement.
“The New York City subway system is among the safest places in the safest city in America. The chance of being a victim of a major crime is roughly one in a million. Any other characterization denigrates the hard work of the men and women of the NYPD,” said NYPD spokesman Stephen Davis. “Quality-of-life enforcement in transit remains a priority for the department, with more than 3,500 arrests and 12,300 summonses issued for quality-of-life offenses this year.
The most recent HOPE survey recorded 1,812 homeless people in transit. Homelessness is not a crime and homeless people who are not violating subway rules cannot be ejected from the system. The NYPD and its social service partners have made more than 10,000 contacts in 2017 with homeless people to offer services and shelter. More than 90 percent of those people have refused services.”
On Tuesday afternoon, de Blasio said the situation of homeless people in the subway system is “our responsibility to address.”