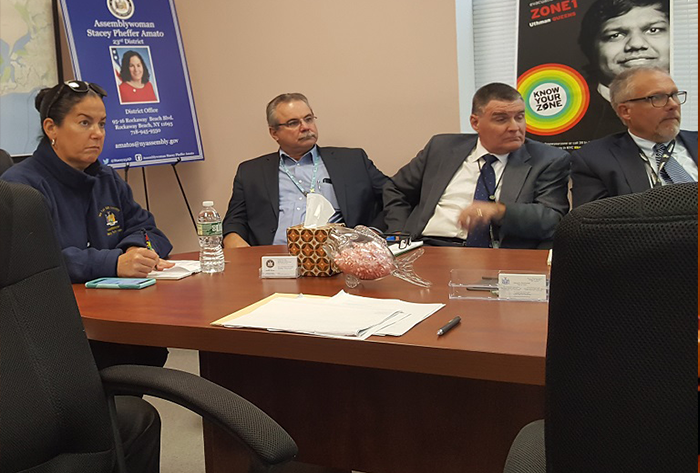 By Forum Staff
Assemblywoman Stacey Pheffer Amato (D-Howard Beach) recently hosted officials from the Federal Aviation Administration and the Port Authority of New York and New Jersey, along with Broad Channel Civic Association President Dan Mundy, Jr. for a meeting at her office to work on addressing noise-pollution complaints emanating from the south Queens neighborhood.
Broad Channel sits directly under the flight path of anywhere from dozens to hundreds of daily flights out of John F. Kennedy International Airport. According to Pheffer Amato, resident complaints suggest that the number of daily overhead flights is increasing, even as new computer-based guidance technology allows flights out of JFK to avoid populated areas except in emergencies or times of very high traffic.
“This isn’t just some homeowners with nothing to complain about,” Pheffer Amato said. “Airplanes departing from JFK do very low overflies of Broad Channel, at all hours of the day and night. Community members suffer from disrupted sleep, windows and foundations rattling, and a lower quality of life. The federally-mandated, Part 150 noise study for JFK is supposed to take into account public input, but we’ve raised this issue before and we need a demonstration that the FAA cares about the concerns of this community. We appreciate them and the Port Authority sitting down with us to discuss the issue. Everyone went home with some homework. We’re hoping the flight routing out of JFK stops being needlessly intrusive by taking advantage of these much-hyped new technologies!”