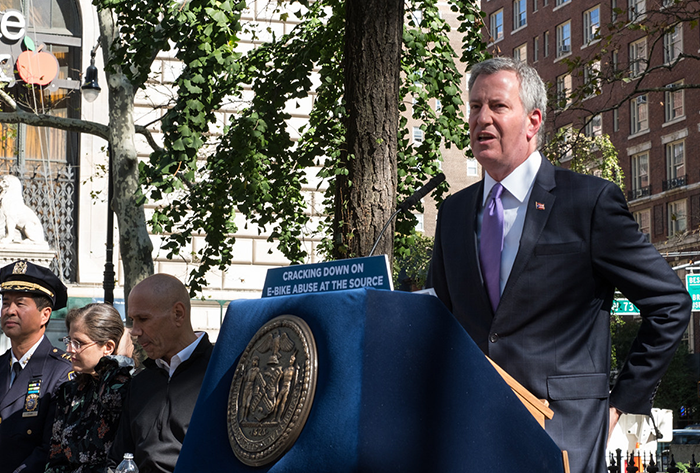 By Michael V. Cusenza
The City will take heightened enforcement action against electric bicycles, with a particular focus on the hazardous operation of e-bikes and businesses a use them or permit employees to ride them, Mayor Bill de Blasio and the City Police Department announced on Thursday.
“E-bikes are too often a danger on the City’s streets and sidewalks,” said Police Commissioner Jim O’Neill. “They’re illegal to operate here, but it seems like you can spot them everywhere – and that’s where our increased enforcement comes in. Officers are confiscating e-bikes from riders and issuing summonses that carry a stiff fine, and enforcement is up dramatically this year. Soon businesses will be held accountable too, because most e-bike riders are acting on their employer’s behalf. The NYPD is committed to keeping city streets safe for everyone and e-bike enforcement is an important part of the plan.”
E-bikes are illegal to operate on streets in the five boroughs. According to the City Administrative Code, an e-bike constitutes a “motorized scooter” and “no person shall operate a motorized scooter in the City of New York.” So far this year, the NYPD has seized 923 e-bikes, compared to the 341 it confiscated this time last year – an increase of more than 170 percent. Nearly 1,800 civil and moving summonses have been issued to e-bike operators year-to-date.
The bikes are prevalent in many south Queens communities. Just last month, the 102nd Precinct, which protects and serves Richmond Hill, Woodhaven, Kew Gardens, and part of Ozone Park, touted a traffic safety initiative in which officers confiscated several illegal electronic bikes across the command.
According to the administration, beginning in 2018, the NYPD will issue a new department directive and provide officers with the necessary forms and training to execute civil enforcement against businesses much more efficiently by allowing officers to issue civil summonses to businesses through the mail. While the NYPD will continue confiscating e-bikes and issuing summonses to riders – particularly those riding in a hazardous manner – officers will step up enforcement activity against businesses that too often put their employees in a position to break the law.
Currently, riders caught operating an e-bike are subject to a civil summons, confiscation and fines of up to $500. Beginning next year, businesses that utilize e-bikes or allow employees to operate them will receive a civil summons and a $100 fine for a first offenses and a $200 fine for each subsequent offense, the City noted.