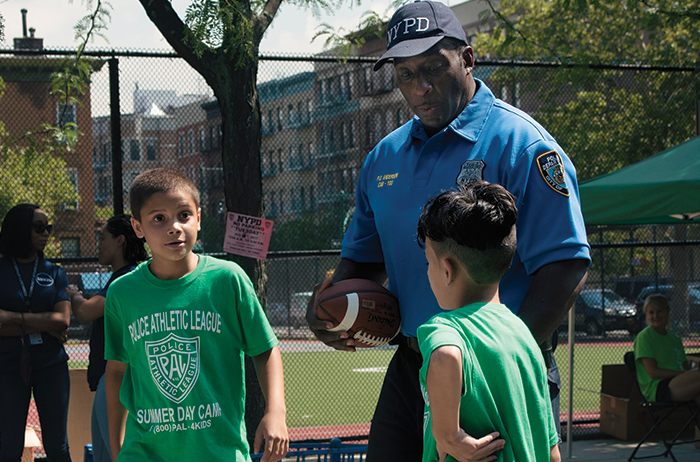 Officer Anderson is a former PAL kid who has been with the NYPD for 23 years and volunteering with the PAL for seven years.

By Forum Staff
The Afterschool Alliance recently recognized City Police Officer Lamont Anderson and his contribution to the Police Athletic League Junior Police program.
The nonprofit organization, which aims to help children gain access to affordable afterschool programs, honored the veteran cop at its “Lights On Afterschool” celebration at Goldie Maple Academy in Far Rockaway.
“Lights On Afterschool” is a nationwide series of rallies for afterschool initiatives organized by AA. Last year, one million people participated in more than 8,000 “Lights On Afterschool” events.
According to the PAL, the Junior Police program helps communities develop a productive relationship between cops and kids. Officer Anderson, a former PAL kid who has been with the NYPD for 23 years and volunteering with the PAL for seven, works with participants on drills, explains the career of a cop, teaches life skills, and plans educational trips. Anderson said he understands the importance of police and youth interactions and that most officers enjoy working with children.
“This work is imperative because kids mainly see a negative perspective when watching the news and other outlets,” Anderson added. “Working with children in the community humanizes the police in their eyes.”
In addition to lauding Anderson’s contributions to the PAL, elected and law enforcement officials, parents and students who attended the Arverne event also witnessed the unveiling of a mural painted by Moving the Lives of Children, an artist highlighting PAL’s 100-plus year tradition of bringing youth and police together.