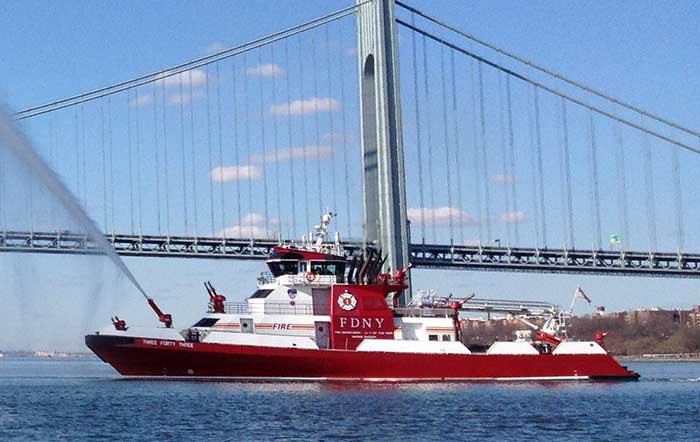 By Michael V. Cusenza
A City Ferry vessel last Wednesday ran aground on a sandbar in the waters off Rockaway, leaving more than two-dozen passengers and crew stranded for hours before first responders could get them safely to shore.
According to City Fire Chief of Special Operations John Esposito, the department received the emergency call around 6 p.m. for an NYC Ferry stuck in Jamaica Bay.
“We responded with land units and our fireboats, and determined that the boat was run aground in about 2-feet of water. We devised a shuttle operation to remove 27 people from the ferry onto a smaller fireboat, onto the medium-sized fireboat, and eventually onto our 140-foot fireboat, the Fireboat 343,” Esposito recalled hours after the successful operation. “It was difficult because they had to climb down a 12-foot straight ladder, down the back of the ferry, onto our boat, then transferred onto several different boats. It was a very slow, tedious, time-consuming operation, with safety in mind. In 20-degree weather, out in the water with the breeze blowing – it was definitely very cold for everybody involved. NYPD, FDNY, and the United States Coast Guard were out there dealing with the elements. The passengers are now out of the elements, we have no reported injuries.”
The accident left at least one area elected official fuming.
“We are glad that no one was seriously injured during this incident,” said State Sen. Joe Addabbo, Jr. (D-Howard Beach). “However, the City needs to seriously improve their response time in situations like this, where 27 people were stuck out on the water in sub-freezing conditions for hours before rescue boats could arrive. This is the second time since Nov. 27 that an NYC Ferry boat crashed into a submerged object, and measures need to be taken to prevent accidents like this from occurring if people are expected to trust and use the City’s ferry system. The City has been lucky that over the recent incidents on the ferry nobody was seriously injured. I’m hopeful that improved safety measures can be implemented before the City’s luck runs out.”