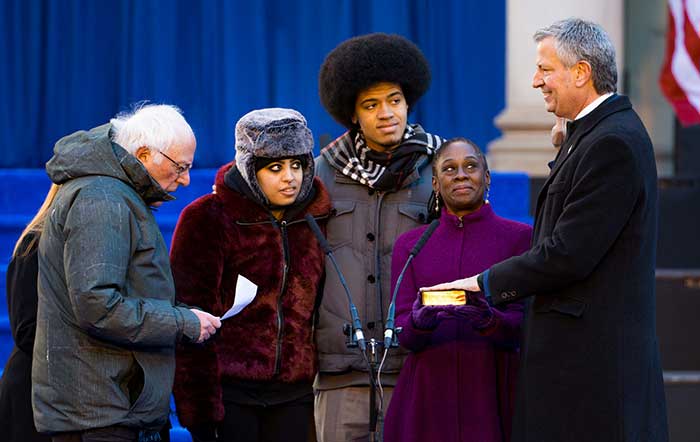 Mayor Bill de Blasio on Monday continued to bolster his national progressive credentials as he invited U.S. Sen. Bernie Sanders (I-Vt.) back home to the Big Apple to swear in Hizzoner for his second term as the 109th mayor of the City of New York.
Sanders, 76, a proud product of Midwood, Brooklyn, and Liberal cult of personality, did not disappoint the throngs who braved the biting cold to bear witness to city tradition.
“As Mayor de Blasio takes the oath of office for a second term, he knows, you know, and I know that we are living in a very unusual moment in American history,” Sanders noted.
De Blasio appreciated Sanders’ presence at Monday’s ceremony – and his 2016 run for the White House.
“Thank you to a true son of Brooklyn for joining us at today’s inauguration ceremony and for changing our national political discourse for the better,” the mayor gushed.
De Blasio also thanked “the people of New York City for entrusting me to be their mayor for a second term,” before listing the accomplishments of his first four years at Gracie Mansion, noting that NYC “is the safest big city in America.”
The mayor then pivoted to the future.
“I have another hope for this city: I want us to be the fairest big city in America,” he said. “Abraham Lincoln once warned, ‘A house divided against itself cannot stand.’ It is now clear that a society where only the One Percent can get ahead is truly a house divided against itself. In this city, we will prove there is a better way. The deepest, truest stakeholders in this city are the people who do the work, who make this city come to life every day, but who too often do not reap the rewards. We commit ourselves to making sure this is ALWAYS their city, that it will not be taken away from them.”
Hizzoner later noted that as sons and daughters of Gotham, who we are is critical to what we will achieve.
“We have one common identity that makes us particularly proud, that gives us a certain swagger. We live in an unspoken state of hope because every morning, we get to wake up and say: ‘I’m a New Yorker,’” de Blasio posited. “And I can’t think of a better way to start a new day and a new year.”