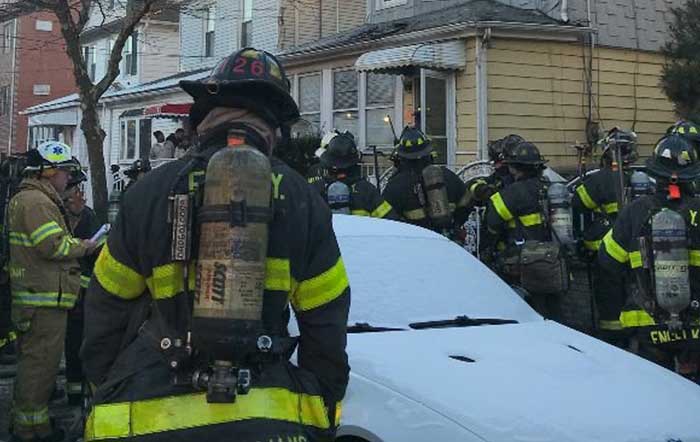 Firefighters respond to the Richmond Hill blaze on Monday afternoon.

By Michael V. Cusenza
Two New Year’s Day blazes in separate south Queens communities forced residents out into the brutal cold, according to City Fire officials and published reports.
The first fire broke out around 12:45 p.m. on Monday in a two-story home on 115th Street near 95th Avenue in Richmond Hill. It was quickly brought under control and no injuries were reported.
Later that night, around 7 p.m., a three-alarm inferno erupted at a two-story home on 113th Street between 103rd Avenue and Liberty Avenue in South Ozone Park. The City’s Bravest had the blaze under control in approximately 90 minutes. No injuries were reported, but 15-20 people were displaced as a result of the incident.
The fire-ravaged South Ozone Park house apparently has a checkered safety past. Analysis of City Department of Buildings records first performed by the blog Queens Crap showed that owners incurred myriad illegal-conversion violations between 1995 and 2009.