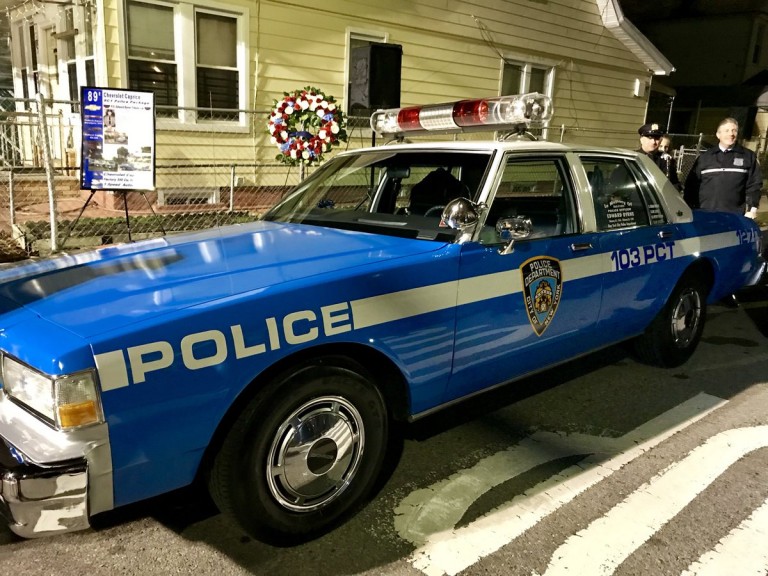 Exact replica of the City Police Department patrol car in which Officer Eddie Byrne was sitting when he was gunned down on Feb. 26, 1988. Photo Courtesy of NYPD

In the early morning hours of Feb. 26, 1988, Eddie Byrne gave up everything for this borough, this city, this country. That Friday, Eddie Byrne made the kind of once-every-millennium sacrifice that you might only have read about in comic books.

Byrne, a rookie City cop just seven months out of the academy and assigned to the 103rd Precinct, was summarily executed on Feb. 26, 1988, as he sat in his marked radio motor patrol car at 107th Avenue and Inwood Street in Jamaica, guarding the home of a critical witness in a major drug case.

The four killers that were convicted of the assassination—Philip Copeland, Todd Scott, Scott Cobb, and David McClary—were members of a drug gang that had been instructed to kill a police officer. At approximately 3:30 a.m., one of the men knocked on the passenger-side window of Byrne’s car to distract him as a second man opened fire just outside the driver’s side window. Byrne was shot five times in the head. 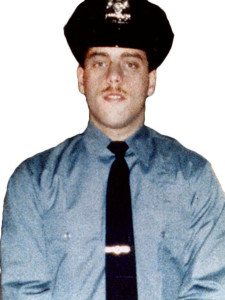 Byrne, a rookie just seven months out of the Police Academy and assigned to the 103rd Precinct, was killed guarding a critical witness in a major Jamaica drug case. Photo Courtesy of NYPD

Copeland, Scott, Cobb, and McClary were sentenced to 25 years to life in prison. Each has been denied parole at their hearings.

On Monday, Feb. 26, 2018, a grateful city gathered at that infamous Jamaica intersection to mark the 30th anniversary of Eddie Byrne’s sacrifice.

“That was the beginning. That was a wakeup call for this whole city that it was time. It was time to no longer accept the violence that was so prevalent in New York City back in the ’70s and the ’80s,” recalled City Police Commissioner Jim O’Neill. “That wasn’t the high water mark though. In 1990 there were 2,245 homicides, but that was the beginning and we continued each and every year after that to make sure that the people who take this job understand why they take it. They take it to make a difference and to do good, and to make life better for the 8.5 million people in this great city. And they continue to do it each and every day.”

Mayor Bill de Blasio characterized Byrne’s death as not just simply a tipping point, but the spark of a revolution.

“In every tragedy we look for something we can cling onto and the case of the loss of Eddie is something very, very meaningful. He did not die in vain by any stretch of the imagination. There was anger, there was revulsion at the death of this good, young man,” he said. “It was not something this city ignored. It galvanized people, created one of those moments where people said enough is enough. The city came together and with the NYPD, the people of this city said we will not accept a situation where a young man like this is taken from us and we will not accept lawlessness. The NYPD, working with partners in every community block by block over years proceeded to take back this city. Many believe it began that day. I think a way to think about it is this: Eddie Byrne’s life may have ended but his tour of duty never did.”