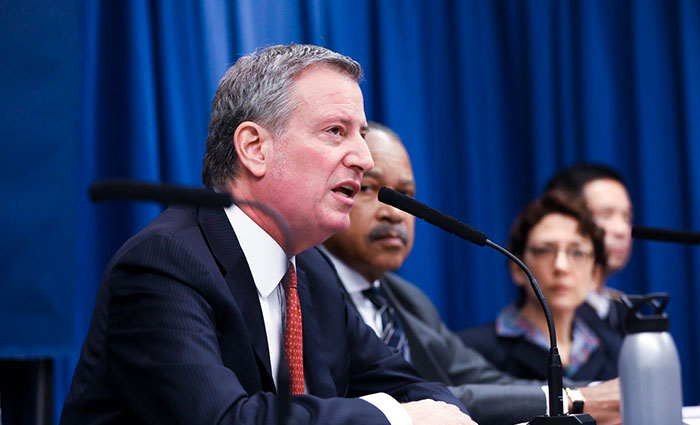 By Michael V. Cusenza
A Queens restaurateur who has claimed to have engaged in a quid-pro-quo years ago with Mayor Bill de Blasio, raising thousands in campaign cash in exchange for access and favors, invoked Hizzoner on a Central Islip witness stand over several days this past week as he testified in the federal corruption trial of former Nassau County Executive Ed Mangano.
Harendra Singh, owner of the now-shuttered Water’s Edge eatery in Long Island City, said, in no uncertain terms, that he bribed de Blasio because he was having permit and lease issues with his restaurant.
“I wanted to get my lease extended…The key was to have [then Department of Citywide Administrative Services] Commissioner [Stacey] Cumberbatch comply with the mayor’s request,” Singh said, according to a New York Post report.
De Blasio has steadfastly and vehemently denied all accusations of impropriety.
Singh is considered the prosecution’s star witness in Mangano’s trial. Singh has said that he engaged in a similar quid-pro-quo with the former Nassau County executive.
Mangano and Town of Oyster Bay Supervisor John Venditto were indicted in October 2016 on charges of conspiracy to commit federal program bribery and honest services fraud. Mangano was also charged with extortion. Ed Mangano, his wife, Linda, and Venditto also were charged with obstructing justice; Linda Mangano and Venditto were also indicted for making false statements.
As alleged in charging documents, between January 2010 and February 2015, Ed Mangano, Venditto, and others, engaged in a scheme to receive bribes and kickbacks from Singh, in exchange for performing official actions to benefit Singh in connection with his businesses in Nassau County and Oyster Bay. The official actions included: (a) Oyster Bay’s guarantee of certain loans that Singh received from a bank and lender in connection with Singh’s status as an Oyster Bay concessionaire; and (b) Nassau County’s award of certain contracts to Singh’s businesses.
According to the indictment, Singh provided Linda Mangano with a “no-show” job at his restaurant from April 2010 to August 2014. The payments from Singh to her in connection with her “no-show” job totaled more than $450,000. In addition, Singh paid for various hotel and travel expenses for the Mangano family, including vacations to Niagara Falls in 2010, Marco Island Florida in December 2011, St. Thomas in July 2012, Turks and Caicos in July 2013, and Amelia Island, Florida in July 2014, as well as an ergonomic office chair in January 2010 ($3,371.90), massage chair from Brookstone in September 2012 ($3,623.73), a Panerai Luminor watch in November 2012 ($7,304), and hardwood flooring and its installation in the Manganos’ bedroom in January 2013 ($3,701.81). Singh also provided free meals to Ed Mangano and his family and associates, according to federal prosecutors.
And from July 2011 to December 2013, according to the indictment, Singh additionally provided Venditto and his family members and associates with free limousine service. Singh also allowed Venditto to hold fundraisers at Singh’s restaurants at a discounted rate and permitted Venditto to use a conference room in the basement of one of his restaurants.