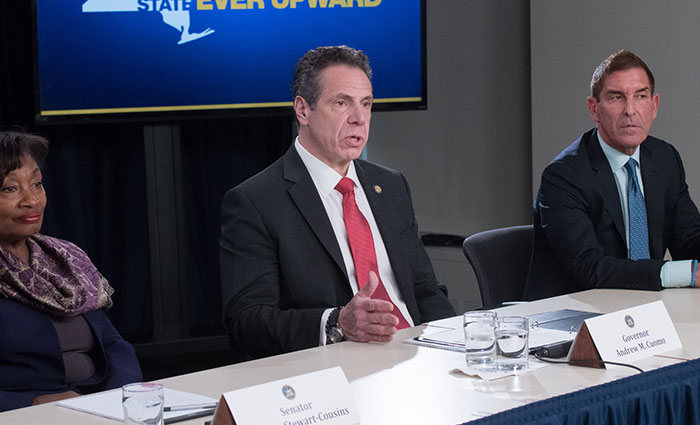 By Michael V. Cusenza
IDC ya later.
The breakaway Independent Democratic Conference, a group of eight Democratic State senators who have caucused with Republicans since 2012, has dissolved.
Governor Andrew Cuomo, Senate Democratic Leader Andrea Stewart-Cousins (D-Yonkers) and Senate Democratic Deputy Leader Jeff Klein (D-Bronx) last week announced a unified Democratic State Senate.
“The State of New York, I don’t think it’s over dramatic to say it, is under attack. It is under attack by the Trump administration, working with [House Speaker] Paul Ryan and [Senate Majority Leader] Mitch McConnell which are trying to bring an extreme conservative ideology to this country and to this state,” Cuomo said at a press conference with Stewart-Cousins and the former IDC Leader Klein. “Very simply, they are repugnant to all the values that we represent and that we hold dear. And they have specifically targeted New York and New York’s economy. They’re against everything that we have fought for and everything that we have achieved.”
According to Cuomo, the newly unified Senate Dems have two goals.
“Number one: Elect a Democratic Congress so we can stop the Washington agenda and stop the Washington agenda from further damaging our state. And secondly, to elect a Democratic Senate so we can protect ourselves with our own state laws here in New York.”
And the first order of business for the new-look legislative chamber, according to the governor, is to win two State Senate special elections that are coming up on April 24: the 37th District (Westchester) and the 32nd District (the Bronx).
“It is not about us, it is not about individuals, it’s about our collective commitment to serving the people who send us here to do their work,” Stewart-Cousins said. “I think we are a house divided, we don’t stand, a house united, we stand. We stand tall. We stand for the right things and we’re able to move not only the state, but to send a message that we really are stronger and more productive for everyone when we work together.”
Of the eight members of the IDC, two represent Queens communities: Sen. Tony Avella (D-Bayside), and Sen. Jose Peralta (D-East Elmhurst).
“Since the election of Trump, my constituents, and the rest of New Yorkers, have been constantly under attack. This is why it is vital for all Democrats to work and fight together to protect all New Yorkers,” Peralta said. “Under the leadership of Gov. Cuomo, we will be able to promote our values and ensure our progressive common agenda moves forward.”
Assembly Speaker Carl Heastie echoed the sentiment of the importance of Democratic unity.
“During a time when we are facing an increasingly hostile federal government this is more important than ever. Republicans are threatening to undo the progress we have made for all our citizens and we must make sure this does not happen. We must be united in defeating the destructive policies of Donald Trump and the Republican Party,” Heastie said. “Working together, we can grow our majorities and accomplish great things for the people of New York.”