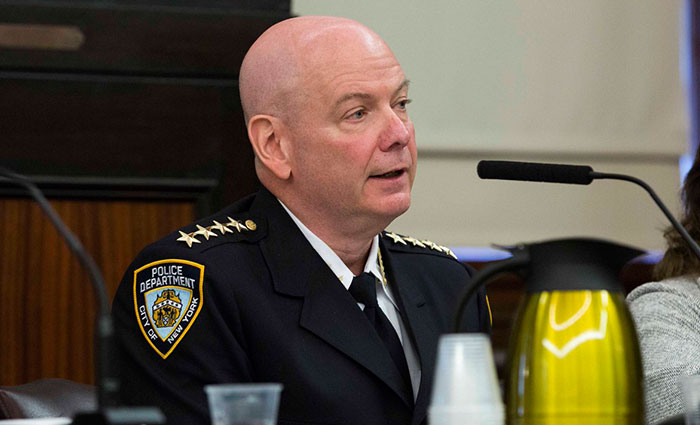 NYPD Chief of Department Terry Monahan was grilled at a recent City Council hearing regarding the department’s Special Victims Division.

By Michael V. Cusenza
City Police officials on Friday deservedly touted the news that crime continued to decline in the Big Apple in March, setting a new record for the first three months of any year since the CompStat crime-fighting tool was introduced in 1994.
However, the celebration was relatively brief, as department heads weathered a fusillade of criticism and pointed questions on Monday from City Council members during a joint Committee on Public Safety and Committee on Women oversight hearing of the NYPD’s handling of sex crimes investigations.
City lawmakers convened the hearing following an eye-opening Department of Investigation report which noted that the department has “routinely understaffed and neglected the Special Victims Division, negatively impacting sexual assault investigations.”
The year-long DOI investigation found that the NYPD has understaffed and under-resourced SVD for at least the last nine years, despite recommendations from the NYPD’s own Sex Crimes Working Group in 2010 and consistent warnings raised by SVD leadership in the years since. Internal NYPD documents, not previously made public and obtained by DOI investigators, acknowledge that many sexual assault cases are not properly investigated due to staffing and resource limitations. Interviews with multiple prosecutors confirmed the concern.
For example, as a result of understaffing, the DOI report notes that the investigation found that the NYPD has prioritized so-called “stranger rapes” and other more high-profile cases, while “acquaintance rape” and other investigations receive less attention and, in some instances, are even sent to local precinct squads for post-arrest investigation, which means the case is not investigated post-arrest by SVD at all. That responsibility instead stays with precinct-level detectives who are not trained in sex crimes investigations. Documents as well as current and former SVD staff, sex crime prosecutors, service providers, and victims’ advocates all confirmed to DOI that chronic understaffing and inexperience have “diluted” and “shortened” investigations, jeopardized prosecutions, re-traumatized victims, and negatively impacted the reporting of sex crimes, thereby adversely affecting public safety.
“The neglect and understaffing of NYPD’s Special Victims Division are serious and deeply troubling and the failure to treat acquaintance rape as an equal priority is unacceptable,” said DOI Commissioner Mark Peters. “While DOI’s report details the shortcomings currently hindering SVD, it provides a critical roadmap for the future. NYPD must give the Special Victims Division the resources and personnel it needs to carry out its important mission.”
The DOI report makes 12 recommendations to address the issues, including:
• NYPD should immediately increase staffing in SVD units to meet the minimum investigative capacity required by an evidence-backed and nationally-accepted staffing analysis model. To appropriately handle a caseload that existed in 2017, that model would require 73 additional hires, including an additional 16 detectives in the Queens adult sex crimes squad.
• NYPD should require all adult sex crimes be investigated and/or enhanced by SVD detectives — including “domestic rape” and “acquaintance rape” in which patrol officers have made an arrest.
• NYPD should invest in a new case management system for SVD that would replace its current system. The new system should have the highest security protocols, as well as advanced caseload, staff management, and data analysis capabilities.
Of the seven major index felonies, only one actually increased in March, according to CompStat: There were 76 more reported rapes last month, an increase of 24.8 percent compared to March 2017.