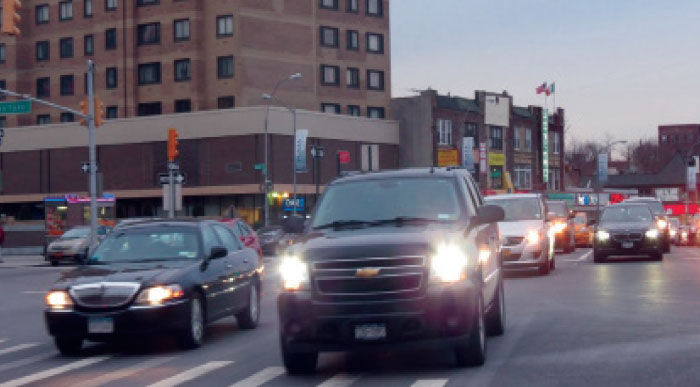 It seems that over the last few years a certain segment of Gotham’s population has been clearly targeted—by opportunistic elected officials, advocates for “the wronged,” over-zealous environmental stewards…take your pick. They’ve been unfairly branded with a scarlet “CO” (carbon monoxide), prosecuted as soulless polluters in the court of green public opinion. Increasingly they find themselves feeling like an enemy on their own terra firma.
They are shunned. They are ticketed. They are regulated.
They are drivers.
I’ve had my driver’s license for two decades, and it seems like each year the cacophony of bureaucratic voices gets louder, telling me, via legislation, that they wish I’d never earned it. It feels like each week it’s something new that tries to compel us to use the subway, buses, or bikes instead of—God forbid—your own vehicle.
It’s almost like the Big Apple has produced more miles of bike lanes in recent years than bagels.
And the anti-auto alliance has recently eschewed subliminal messaging, opting instead for the blatant.
“We are trying to disincentivize cars in New York City. We’re trying to get people to use cars less.”
You read that correctly. There it is. Plain and simple. That’s a quote from City Council Speaker Corey Johnson in a Daily News report on residential parking permits.
Ahh, parking. If ever faced with two options: an anesthesia-less root canal or searching for parking in Queens, I’m pretty confident that the overwhelming majority of native New Yorkers would be searching their phones for the nearest dentist before you could finish posing the question.
That’s why we need ideas like a residential parking permit system.
“Many New Yorkers are tired of competing with out-of-town commuters who do not live where they park,” said Councilman Ydanis Rodriguez (D-Manhattan). “A residential parking permit system in NYC can help address congestion in our city and discourage commuters from driving into our city to park in our streets and encourage using mass transit.”
You don’t need to look far for examples of drivers being edged out of their own city. On Monday morning, I made a right turn from Park Lane South onto Woodhaven Boulevard, where I was immediately greeted by a massive impromptu parking lot. City Department of Transportation contractors were working on traffic signals at the intersection of Jamaica Avenue and Woodhaven Boulevard. After barely inching along for 10 minutes, my lonely, agonized eyes looked to my right and saw a pristine piece of real estate that USED TO be part of this grand thoroughfare. But thanks to Select Bus Service, if I venture into that lane—the lane originally dedicated to thru traffic that was unceremoniously stolen and appropriated by the DOT and MTA—I would be greeted by a three-figure fine in the mail.
So instead all I could do was stare at an empty artery…and wonder what could have been of my commute that morning.
If it seems like we motorists are feeling victimized it’s because we are. Pols can’t keep crafting laws that favor mass transit or bicycles. Some of us, especially inhabitants of “transportation deserts” in Queens, rely on our automobiles. We need ideas for legislation that would benefit us as well.