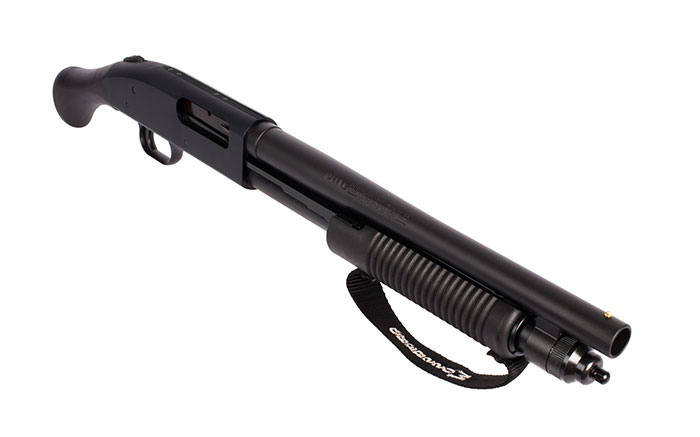 Mossberg 12-gauge shotgun similar to the one that allegedly was seized on Thursday.

By Forum Staff
A 44-year-old Queens Village man has been charged with keeping a large cache of illegal weapons and thousands of rounds of ammunition inside his home.
“The defendant is accused of stockpiling an arsenal of deadly weapons in his home along with an enormous amount of ammunition. Illegal firearms pose an extreme risk to the public and in Queens County creating your own warehouse of lethal shotguns and rifles will not be tolerated,”siad DA Brown.
Keith Harvey was arraigned before Queens Criminal Court Judge Scott Dunn on a complaint charging him with four counts of second-degree criminal possession of a weapon, 21 counts of third-degree criminal possession of a weapon, four counts of criminal possession of a firearm, firearms; unlawful possession of pistol or revolver ammunition and 14 counts of possession of rifles and shotguns without a permit.
Bail was set at $150,000 and Harvey was ordered to return to court on May 11. According to the charges, a search warrant was executed on the defendants’ residence on April 26, at approximately 9:30 a.m.
Police recovered multiple weapons including 11 rifles, three shotguns and thousands of rounds of ammunition of multiple calibers. Included in the cache of weapons seized were a Mossberg 12 gauge shotgun, a Crossman GIExtreme Rifle, a banana ammo clip containing 25 caliber rounds and a Ruger Model 30 rifle.
If convicted, Harvey faces up to 25 years in prison.