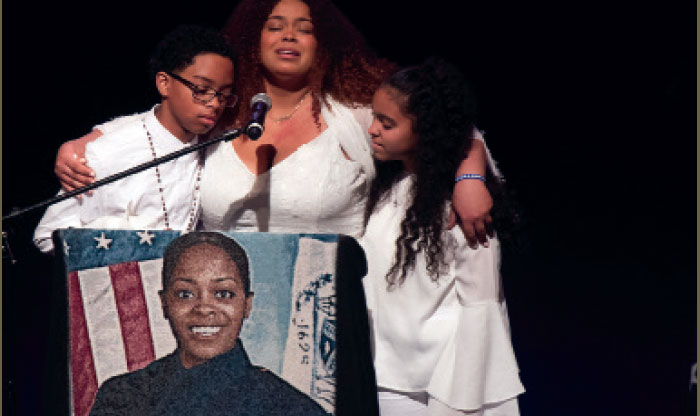 Sometimes, you’ve just got to give credit where it’s due. Even if the person who deserves said credit frustrates and/or repulses you 24/7, 365—it’s the New York way.
This time that entity is borough native (and President of the United States) Donald Trump.
Yes. You read that correctly. The Donald.
On Tuesday, according to the New York Daily News, President Trump “spontaneously” invited the family of slain City Police Officer Miosotis Familia to the dais as he delivered remarks during an event in D.C. honoring law enforcement officers who have made the ultimate sacrifice in the line of duty.
The veteran City cop was murdered in cold blood last July in the Bronx as she sat in a marked department vehicle with her partner. Familia, 48, sustained a single gunshot wound to the head when assailant Alexander Bonds, 34, fired through the mobile command unit’s window shortly after midnight. The mother of three was rushed to St. Barnabas Hospital. She succumbed to her injury around 3:30 a.m.
“She was ambushed by a man for the simple reason that she was a member of the police department,” Trump said on Tuesday. “That was the simple reason.”
An NYPD Anti-Crime team encountered Bonds running on Morris Avenue, approximately one block from the scene of the shooting. As they confronted him, he drew the revolver he used to end Familia’s life and destroy those of her children. The officers fired at him, striking and killing him.
Familia’s family said they appreciated Trump’s gesture.

We appreciate Miosotis Familia. Forever.
This Mother’s Day in New York was somewhat marred by the recent revelation of more abhorrent actions of another so-called man in a position of power. Regardless, we can never forget our mothers and moms like Officer Familia.
Trump’s honoring of Familia and her heroism made us think of Det. Brian Moore and his mom, Irene. On May 2, 2015, Brian Moore was shot in the face in Springfield Gardens after asking a suspect what he was fidgeting with in his waistband. His family decided to take him off life support two days later.
Last year, Moore’s command dedicated a Memorial Wall inside the 222nd Street stationhouse featuring the young lawman’s plaque alongside those of three other members of the 105th Precinct who gave everything for the World’s Borough. “Fidelis Ad Mortem” is written above the individual memorials. Faithful Unto Death.
We’ll never forget Irene’s remarks at that event. We’ll never forget Det. Brian Moore.
“Anyone who has met my son knows Brian’s smile – his great, big smile,” she began, “and that smile mirrored his great, big heart. The capacity he had to love life, to love to laugh, his wonderful, winning personality will never be destroyed by any bullet. Brian has changed countless lives forever. And because of this, we are able to stand strong, all of us.”
Irene ended her remarks with a quote from former President Ronald Reagan.
“Wherever a beautiful soul has been, there is a trail of beautiful memories.”
And so, belatedly this week, we ask you please to remember Miosotis Familia, Irene Moore, and all of the mothers of slain New York City police officers. Their unimaginable pain may be eclipsed only by their incomprehensible strength.