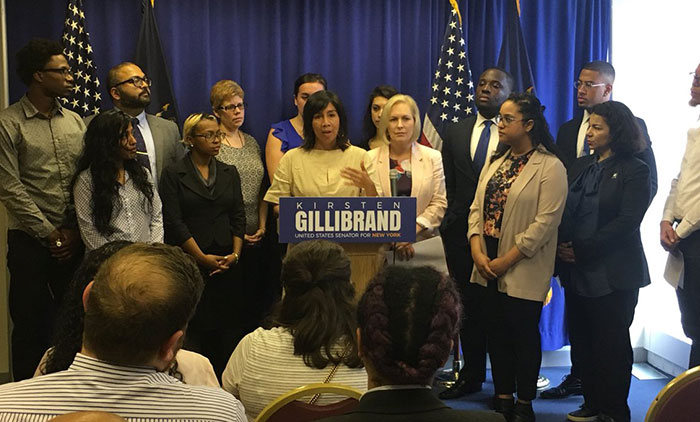 Photo Courtesy of the City Department of Consumer Affairs

City Department of Consumer Affairs Commissioner Lorelei Salas (at lectern), students, and advocates joined Gillibrand (at Salas’ l.) on Sunday in her push for new oversightregulations and legislation.

By Forum Staff
Noting that the Trump administration recently announced that it will pare back its monitoring of student loan companies for predatory practices, U.S. Sen. Kirsten Gillibrand (D-N.Y.) on Sunday pushed for new oversight regulations and legislation that could “dramatically” lower monthly loan payments for hundreds of thousands of graduates.
New York students have higher average loan balances than those in the rest of the country, and many areas of the city have disproportionately high rates of loan default, which forces borrowers into financial despair and could hurt their credit forever, according to Gillibrand. The Consumer Financial Protection Bureau’s decision to close the student lending office opens up graduates to predatory practices that could force them to pay higher monthly payments and increase the likelihood that they will default on their loans, New York’s junior senator added.
To address this problem, Gillibrand said she is pushing to pass two pieces of legislation: the Students Emergency Loan Refinancing Act and the Streamlining Income-driven, Manageable Payments on Loans for Education (SIMPLE) Act. Specifically, the Students Emergency Loan Refinancing Act would cut interest rates and immediately reduce debt for millions of student-loan borrowers. The SIMPLE Act would automatically enroll vulnerable borrowers in income-based repayment programs, which would help slash monthly payments, eliminate burdensome paperwork requirements, and reduce the likelihood of default.
“Thousands of New Yorkers are graduating from college this time of year, and many of them will already be buried in student debt from the moment they walk across the stage and get their diploma. But instead of helping them out, the Trump Administration just passed new rules that make students even more vulnerable to predatory loan practices that could push them into financial despair,”Gillibrand said. “We can and must solve this problem now, because our student debt crisis is creating tremendous hardship for our recent graduates and holding back an entire generation. We need real oversight of our student loan servicers, and we need to make sure that students can actually pay back their loans without defaulting.”