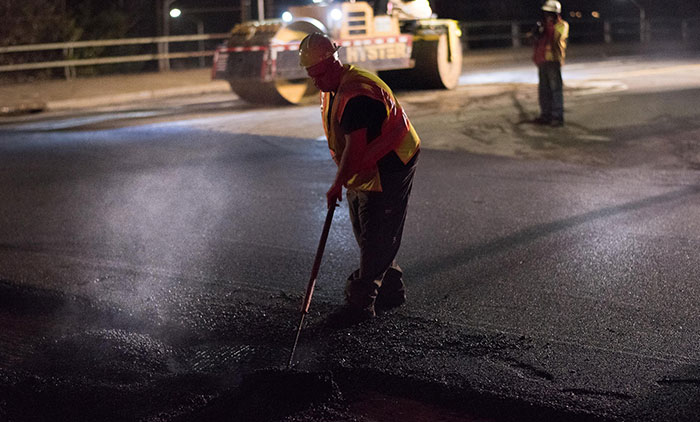 By Forum Staff
The City Department of Transportation recently paved its 5,000th lane-mile since 2014, Mayor Bill de Blasio announced on Friday.
The increasedф repaving has driven down potholes 44 percent, according to the City. Hizzoner pointed to a 10-year investment of $1.6 billion in street repairs as the reason for the record asphalt output.
“Smoother streets have meant fewer potholes. We paved it forward with a big investment in repaving, and the men and women of the DOT have delivered,” de Blasio added. “We will keep up this pace, and bring on new equipment, new asphalt and new ways to avoid the frustration of newly paved streets getting dug up.”
De Blasio also unveiled on Friday investments and innovations coming to DOT’s paving efforts:
Reining in street cuts for utility work – A newly paved street can last 10 to 20 years. But too often, repaved streets are quickly marred by utility “street cuts.” Starting in July, the DOT will reduce street cuts for repairs for a full two years after a street is repaved on Staten Island (the current permit-hold time is 18 months, with any repairs made during that time requiring significant and costly restoration of the street at the utility’s expense). If successful, the policy will be applied citywide. Going forward, DOT will also meet regularly with National Grid and Con Edison to better plan and coordinate any disruptive work they plan on city roadways, the mayor pledged.
New paving equipment – As part of the City’s increased investment in paving, DOT announced that it has made a $36 million investment in its fleet of street paving equipment – including new trucks, milling equipment and.
Rubberized asphalt – After a recent successful pilot along Fingerboard Road on Staten Island, DOT will be looking to expand the use of innovative roadway materials that combines recycled crumb rubber with liquid asphalt. Rubberized streets appear to suffer fewer cracks and also offer quieter drives.
Red asphalt – DOT will expand the use of red asphalt for dedicated bus lanes. Bus lanes paved with red asphalt are more cost-effective: They last longer and completely eliminate the need for street painting and touch-ups, de Blasio noted.
High-Performance Asphalt Overlay – After the successful conversions of Manhattan’s First Avenue and Fordham Road in the Bronx, DOT will explore the transformation of the City’s concrete roadways with a new overlay of asphalt. According to the administration, concrete roads with an asphalt layer reduce traffic noise and are less expensive to repair.
Additionally, de Blasio announced that major streets in every borough will be repaved in the last six weeks of the current fiscal year that ends on June 30, including Northern and Vernon boulevards in Queens.
“We have reached this significant milestone while at the same time seeing potholes and pothole complaints decline dramatically—by more than 50 percent,” said DOT Commissioner Polly Trottenberg. “As our paving crews now transition from potholes to road repaving, we ask that New York drivers give them the necessary space and maintain a safe speed as we try to pave as many streets during these warm weather months.”