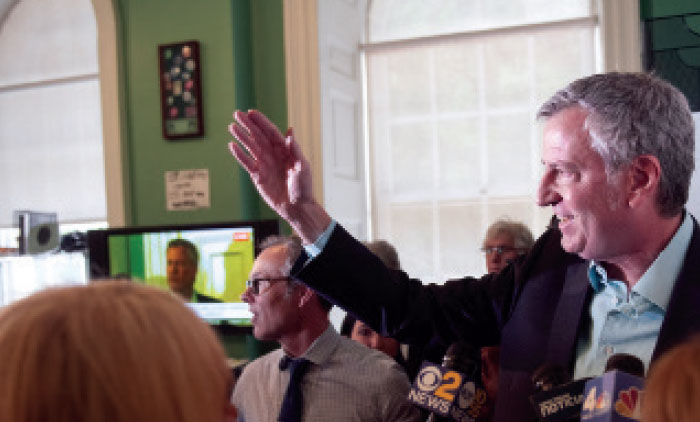 While not exactly a “stop the presses!” moment, Mayor Bill de Blasio this week revealed the enmity he has—and has had—for the members of the press who are tasked with chronicling his administration.

Hizzoner actually showed his cards in old emails that recently surfaced. On Thursday, the City finally handed over a massive trove of more than 4,000 electronic correspondences to Spectrum News NY1 and the New York Post. Earlier this month, following prolonged litigation, State Appellate Division Judge Anil Singh upheld a lower court’s ruling that the administration must disclose all emails between City Hall and outside consultants that de Blasio famously dubbed “agents of the City.”

These secret “agents” actually were from the private consulting firm BerlinRosen, led by long-time de Blasio confidant Jonathan Rosen. In its argument against NY1 and the Post’s Freedom of Information Law request, the City claimed that though Rosen and several other private consultants were not public servants, they served as “agents of the City,” exempting them from such FOIL requests.

Let’s stop for a moment and think back to those halcyon days four or five years ago when Mayor de Blasio promised to run the most honest, transparent, and accessible administration this city has ever seen.

How long did that last?

Instead, we see this email from the mayor in August 2015:

“First of all, the news media is pitiful and it’s sad for our city and nation. We can make a conscience decision to surrender…or we can govern. They will never defeat us.”

While we’d never lump together de Blasio and Queens’ own President Donald Trump—they are polar opposites in every sense. However, that quote, to us at least, rings eerily similar to one of many from Mr. Trump in which he gleefully blasts the press.

“The fake news media is the enemy of the American people,” the President tweeted in February 2017.

De Blasio on Friday attempted to expound on the email during his weekly spot on “The Brian Lehrer Show” on WNYC-FM.

“I think there’s a problem with mainstream media. I mean, I’ll get to the specifics but I think the broad point is there’s a problem with mainstream media. I have felt this my whole life,” de Blasio said on Friday during his weekly spot on “The Brian Lehrer Show” on WNYC-FM. “This is not new to my role as mayor. We have a corporate media. It is based on a free-enterprise model. It’s based on selling things. I don’t think that’s healthy. I think that leads to a lot of distortions. I am a big fan of public radio and public TV. I’m a big fan of alternative media and subscription-based media like The Guardian that are trying to take some of the bias out of the equation that is based—that comes from needing clicks and having a mentality that connects to a corporate structure.”

He later added, “Look, I don’t think the coverage has reflected the work we’re doing or the impact it’s having on the people of this city.”

So, because the press doesn’t write that which you’d like it to write about you and your “accomplishments,” it’s “pitiful” and “sad”? Is that even mature?

Wake up, Mr. Mayor. This is New York City. We’ll praise you for honest-to-goodness progress—and we’ll tear you a new one when you, or any other elected leader, deserves it.

If you don’t like it, take your ball and go back to Boston.