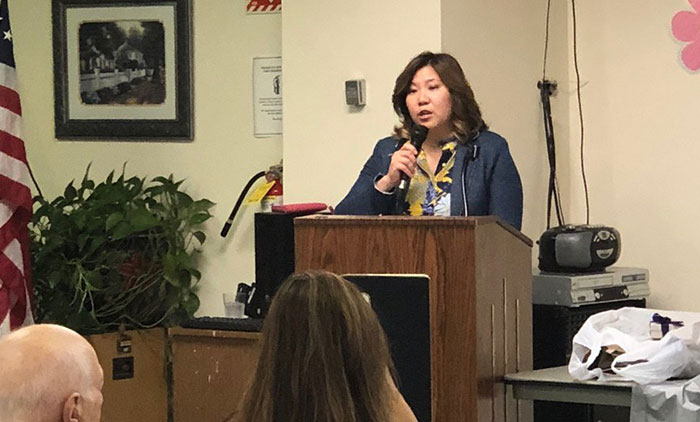 Meng noted that “excessive airplane noise remains a major issue that negatively impacts residents of our borough, and we must continue to take advantage of all opportunities…that can help provide long-term solutions to the problem.”

By Forum Staff
The U.S. House of Representatives has passed a measure to authorize the Navy’s Jet Noise Reduction Program, an initiative that may also bring relief to the ears of many borough residents in the near future, according to U.S. Rep. Grace Meng (D-Flushing).
The program, which is an initiative within the U.S. Navy’s Office of Naval Research, seeks to reduce engine noise of high-performance military aircraft, said Meng, who introduced the measure that was passed in the House last week.
And breakthroughs that are made could possibly be applied to commercial jets, the congresswoman noted, which would result in decreased airplane noise over communities in Queens. Meng’s provision – which passed as an amendment to the National Defense Authorization Act – would direct the Secretary of the Navy to share relevant noise reduction discoveries with the civilian aviation community.
Meng originally secured the authorization of the Jet Noise Reduction Program in last year’s House-passed NDAA, but the measure was not included in the version passed by the Senate. She said she’s hopeful that the provision will be in both versions this year.
The NDAA is the annual legislation that establishes funding levels and policies for the U.S. Department of Defense. The bill would take effect at the beginning of Fiscal Year 2019 which begins on Oct. 1.
“The Jet Noise Reduction Program has the potential to be a critical component in mitigating excessive aircraft noise over…Queens,” Meng said. “That is why it’s important for Congress to authorize this initiative, and I’m pleased that the House has voted to do so. The U.S. military has made many significant breakthroughs over the years that have greatly benefitted our nation. Many of these advancements have been implemented for civilian use and the same can certainly be done for combating airplane noise. Excessive airplane noise remains a major issue that negatively impacts residents of our borough, and we must continue to take advantage of all opportunities – such as measures like this – that can help provide long-term solutions to the problem. I now call for the NDAA to be passed by the Senate with this specific provision included and I’m hopeful that this will happen.”
U.S. Rep. Hakeem Jeffries (D-Queens and Brooklyn) commended Meng for her “vision and leadership” on the issue.
“This is a step in the right direction,” Jeffries added. “Deafening airplane noise that incessantly pollutes many neighborhoods in New York City is an unacceptable scourge that must be corrected.”