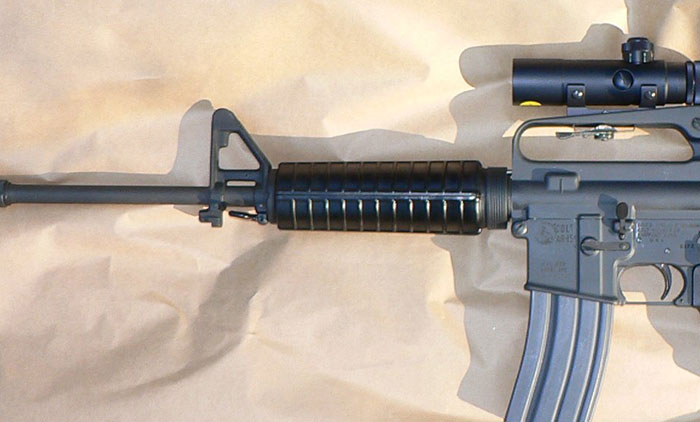 Search warrants netted numerous illegal guns, including an AR-15 (similar to the one pictured).

An acting captain in the Gambino crime family has admitted to his involvement in acts of loansharking and illegal gambling in Nassau and Suffolk counties on Long Island, federal authorities announced on Thursday.
John “Johnny Boy” Ambrosio, 74, pleaded guilty to racketeering conspiracy in federal court in Central Islip. Prosecutors noted that the Huntington resident is the last defendant to plead guilty in a superseding indictment that charged him and six members and associates of the Gambino family and a member of the Bonanno family. Co-conspirators Frank Salerno, 43, of Whitestone; Thomas Anzalone, 44, of Ozone Park; and Alessandro Damelio, 49, of Whitestone; as well as Joseph Durso, Anthony Rodolico and Anthony Saladino, all Gambino associates and residents of Long Island, have previously entered pleas of guilty to racketeering conspiracy.
According to the superseding indictment, between January 2014 and December 2017, Ambrosio and his co-conspirators engaged in a racketeering conspiracy, which included loansharking, operating illegal gambling businesses, narcotics distribution conspiracy, and obstruction of justice conspiracy.At his guilty plea, Ambrosio admitted to participating in the affairs of the Gambino family by collecting an extortionate loan from one victim, and supervising a gambling business involving poker games, electronic gaming machines and sports betting. As part of his plea agreement with the government, Ambrosio will forfeit $100,000, including $66,116 in cash that was seized from his home at the time he was taken into custody.
When Ambrosio and his co-conspirators were arrested on Dec. 12, 2017, law enforcement agents executed search warrants at various locations, including a storage facility in Nassau County, and recovered gambling and loan sharking records, electronic gaming machines, narcotics and narcotics paraphernalia, and numerous firearms, including an AR-15, a .38-caliber revolver, and a sawed-off shotgun. Agents also recovered letters addressed to Ambrosio from Bonanno family boss Michael “The Nose” Mancuso and former Gambino family boss, and Howard Beach resident, John Gotti.
When sentenced later this year, Ambrosio, Anzalone, Damelio, Durso, and Rodolico each face a maximum sentence of 20 years’ imprisonment. Saladino and Salerno each face a mandatory minimum of five years’ imprisonment and up to 40 years for the cocaine distribution conspiracy offenses.