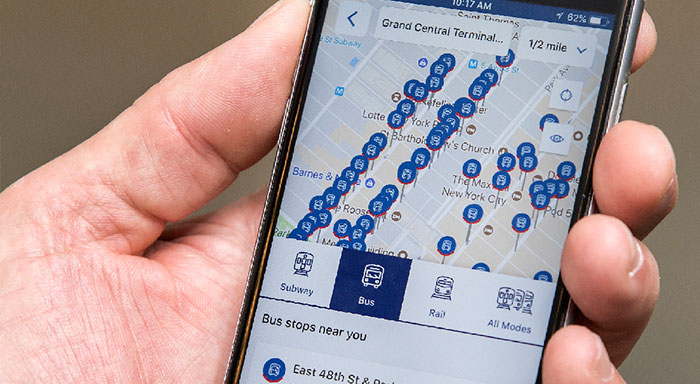 The new app is currently available in the Apple and Google Play app stores.

By Forum Staff
The Metropolitan Transportation Authority on Monday launched a test version of “MYmta,” the agency’s comprehensive new app, along with new.mta.info, its mobile-optimized website.
According to the MTA, both the app and the site “bring wayfinding for all of the MTA’s mass transit properties under one roof,” providing:
• Real-time arrival information for trains, subways and buses.
• Service status, including information on planned work and updates on the causes of delays.
• The ability to find nearby stations and stops with the click of a button.
• A unified trip-planning function for travel across the MTA’s regional transportation network including trains, subways and buses, as well as non-MTA entities such as Staten Island Ferry, NYC Ferry Service, PATH, and New Jersey Transit.
• The ability for customers with mobility challenges to plan accessible trips across trains, subways and buses.
• The ability to personalize the app by saving favorite lines, stations, stops and trips.
• The MTA plans to add functionality related to the bridges and tunnels it operates in a subsequent version of the app.
The MTA is asking its customers to use the feedback functions on the app and the website to indicate what features they like, what can be improved, and what should be added.
The Tri-State Transportation Campaign, a non-profit policy advocacy group that focuses on mobility, accessibility, and livability in New York, New Jersey, and Connecticut, called the app “a huge step forward” for straphangers and the agency.
“I juggle at least four official MTA apps on my phone, and I know I’m far from alone. But with the beta launch of MYmta, riders will finally have one single app for everything: real-time service updates subway and bus arrival times, LIRR and Metro-North schedules, and even commuter rail tickets through the eTix app,” said TSTC Executive Director Nick Sifue ntes.“Having tried it out myself, I think