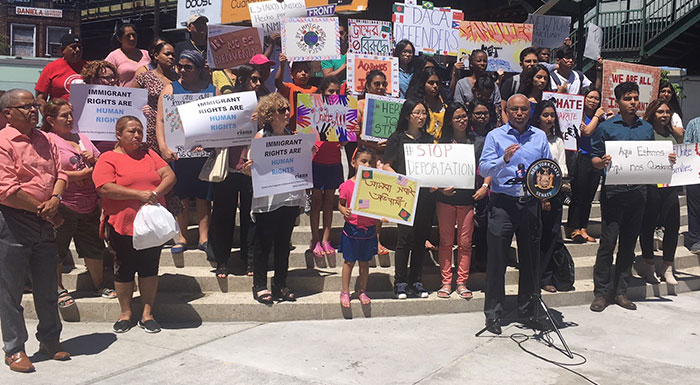 Family separations, massive deportations, this is not what we are all about. This is why we, at the state level, must ensure we become the first line of defense against these ruthless policies,”said Senator Peralta.

By Forum Staff
Two elected State officials on Thursday called for the approval of a bill that would establish New York as a “sanctuary state.”
Under the measure, which has been introduced by State Sen. Jose Peralta (D-East Elmhurst) and Assistant Assembly Speaker Felix Ortiz (D-Brooklyn), state and local enforcement agencies would be prohibited from acting as agents of Immigration and Customs Enforcement, severely limiting the information they would be authorized to share with federal authorities. Additionally, the bill would restrict state and local agencies from cooperating with ICE to arrest or detain immigrants in the Empire State.
“Now more than ever, we must protect immigrant New Yorkers from the cruel and inhumane policies ordered by the White House. Because of this current political climate, hard-working immigrants go about their daily lives with fear in their eyes. Family separations, massive deportations, this is not what we are all about. This is why we, at the state level, must ensure we become the first line of defense against these ruthless policies,” Peralta said at Corona Plaza.
Peralta and Ortiz also urged their colleagues in D.C. to abolish ICE for its treatment of immigrants and separating minors from their parents. The legislators said they were outraged that ICE has been used to conduct raids in accordance with “zero tolerance” as ordered by the Trump administration.
According to their proposed resolution, “ICE has become a nightmare… ICE’s mission is to enforce our laws but has turned into a force used to raid communities, detain hard-working people and to separate families.” The lawmakers’ resolution calls to replace ICE “with an agency designed to protect our borders, ending ICE’s ability to conduct horrifying raids in our towns and cities.”
Peralta and Ortiz noted that, according to a study released by the Fiscal Policy Institute, undocumented immigrants contribute about $1.1 billion to state and local taxes in New York. The analysis points out that undocumented immigrants are responsible for about $40 billion of the state’s Gross Domestic Product, or economic output. They account for 11 percent of the leisure and hospitality industry and 9 percent in agriculture and construction in New York.
“It is absolutely critical for all New Yorkers to stand up with our immigrant neighbors and draw a clear line against federal immigration attacks against our cities and communities,” Ortiz said. “We cannot allow our own law enforcement agencies to assist these efforts without common sense guidelines.”
Immigration advocates have rallied support for the Peralta-Ortiz bills.
“The Center for the Integration and Advancement of New Americans fully supports State Senator Peralta and Assembly Assistant Speaker Felix Ortiz’s efforts to establish New York as a sanctuary state, and to urge Congress to replace ICE,” said CIANA Founder and CEO Emira Habiby Browne. “As the host society, it is our duty to fight against separation of children from their parents, and the detentions and deportations of hard-working immigrants, many running from violence and trauma in their home countries, seeking a safer and better future for their families. Instead, we must provide our new immigrants with the tools and opportunities to contribute their skills and talents and to build stronger communities,”