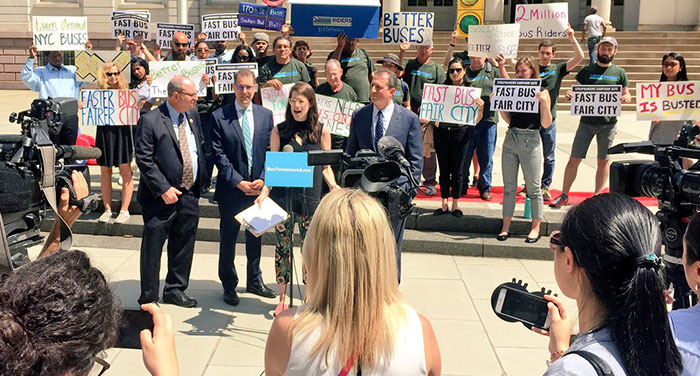 By Michael V. Cusenza
There is much more the City can do to improve service for two million daily bus riders, especially since its jurisdiction includes the Big Apple’s streets and traffic signals, the Bus Turnaround Coalition said on Tuesday as it released its own plan that details steps the de Blasio administration can take to bolster access for commuters.
Billed as a complement to the City’s adoption of the Fair Fares program bus component of the Metropolitan Transportation Authority’s Fast Forward plan, “Fast Bus, Fair City” boasts a suite of transit policy changes that, according to the BTC, would enhance quality of life and social inclusion for daily bus riders.
The coalition, which is composed of the Straphangers Campaign, the Riders Alliance, the TransitCenter transportation reform foundation, and the Tri-State Transportation Campaign, noted that the MTA’s plan would improve service by redesigning bus routes in each borough and permitting riders to board buses through all doors. But in order to actually prioritize buses in traffic, the coalition argued, the MTA’s plan explicitly relies on the City to speed buses through intersections and dedicate lanes on Gotham streets to buses and their riders.
Once set in motion, all three components could provide unparalleled access to city neighborhoods and resources, ensuring that Mayor Bill de Blasio’s own goal of making New York the fairest big city in America is fully realized, the coalition posited.
The BTC’s proposed set of improvements under the mayor’s control include:
• 100 new miles of bus lanes in the next five years, with 60 miles in place by the end of 2021, prioritizing the most heavily traveled and congested routes
• Ramped up bus lane enforcement against vehicles that block bus lanes and reforms to bulk ticket discounts for truck fleet owners and other violators that receive large numbers of tickets
• “Green light” transit signal priority for buses at all possible intersections in the city by 2020
• Bus shelters and real-time passenger information (countdown clocks) at all bus stops
According to the coalition, NYC buses are the slowest of any big city in the country, wait times are unpredictable, and by both measures things are getting worse. Average local bus speeds dropped to 6.7 mph in 2017 from 7 mph in 2015.
“Each day, over a million New Yorkers are subjected to excruciatingly slow bus speeds, endless delays, and meandering routes that don’t get them where they need to go, when they need to go. New Yorkers deserve a modern transit network – and that includes our bus system,” said City Comptroller Scott Stringer. “The MTA’s Bus Plan was a good first step and now it’s time for the City to step up. We need more bus lanes and real bus lane enforcement. We need more bus shelters throughout the five boroughs and well-designed curbs to speed-up on-boarding and off-boarding. And we need to implement available traffic signal technologies that give priority to buses and keep them moving through the city streets. Our bus system is in a state of crisis. The time to act is now!”