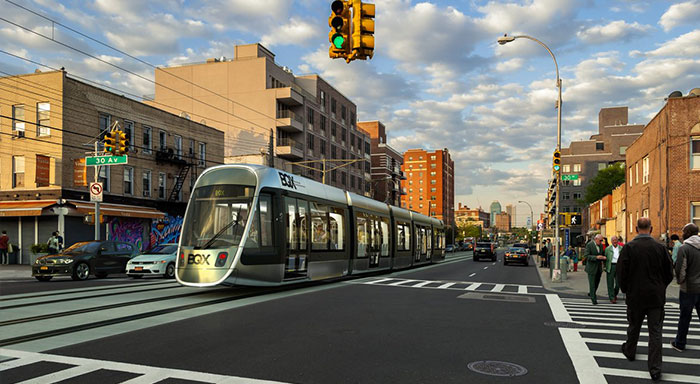 By Forum Staff
The City will move forward with the proposed Brooklyn Queens Connector streetcar following the completion of a two-year feasibility study, Mayor Bill de Blasio announced on Thursday.
According to the administration, the BQX will increase public transit options for neighborhoods with more than half a million New Yorkers living and working along the growing Brooklyn-Queens waterfront corridor, including 40,000 New York City Housing Authority residents. The revised route will connect Astoria, Long Island City, Greenpoint, Williamsburg, the Brooklyn Navy Yard, Downtown Brooklyn, and Red Hook.
De Blasio and Deputy Mayor for Housing and Economic Development Alicia Glen noted that construction and implementation of the streetcar is estimated to cost $2.73 billion and generate $30 billion in economic impact and approximately $1.4 billion in value capture to finance its construction. The City announced it will seek federal funding, among other sources, to deliver the project. First-year ridership is expected to be approximately 50,000 straphangers per day.
“The Brooklyn-Queens waterfront has experienced incredible growth. Now it’s time for our transit system to catch up,” de Blasio said. “The BQX is one of the biggest, most ambitious projects in a generation. It will be a challenge, but New York City is taking it on.”
According to the de Blasio administration, the BQX will bring much-needed connectivity to other existing modes of mass transit, including subways, buses, NYC Ferry, and CitiBike. The expanded connections will generate economic activity and boost access to emerging job clusters, cultural centers, academic institutions, world-class waterfront parks and more, administration officials boasted.
The mayor has called it “the next great step towards creating a five-borough economy, addressing income inequality and easing the lives of so many hardworking New Yorkers… a state of the art, zero-emission streetcar that will run 11 miles from Astoria through Downtown Brooklyn down to Red Hook, connecting to nine ferry landings, 13 subway routes, and 30-plus bus lines.”
Community stakeholders will have opportunities to provide input as the proposal advances to the environmental review and advanced design stages. The City has also pledged to further analyze project delivery methods, streetcar operations, and project implementation.
“As the Brooklyn-Queens waterfront continues to grow, adding new residents and jobs each year, the City must pursue multiple transportation solutions,” said City Department of Transportation Commissioner Polly Trottenberg. “The BQX has the potential to be an integral part of our city’s expanding transportation system. It will complement and connect to our subway and bus system, the NYC ferry, and bike share, while transforming city streets.”
The environmental impact study process will commence this winter, followed by the Uniform Land Use Review Process in 2020. Construction is expected to begin in 2024 and end in 2029.
The idea of a modern-day Gotham trolley system was introduced by Hizzoner during his State of the City address in February 2016.
“The BQX will be a game changer,” de Blasio wrote in the mayoral letter in the recently released Conceptual Design Report. “For the price of a MetroCard fare, the BQX will save many straphangers an average of up to 20 minutes a day on their commute. It will uplift our economy by bringing New Yorkers together in a new way and help us to become the fairest big city in America.”