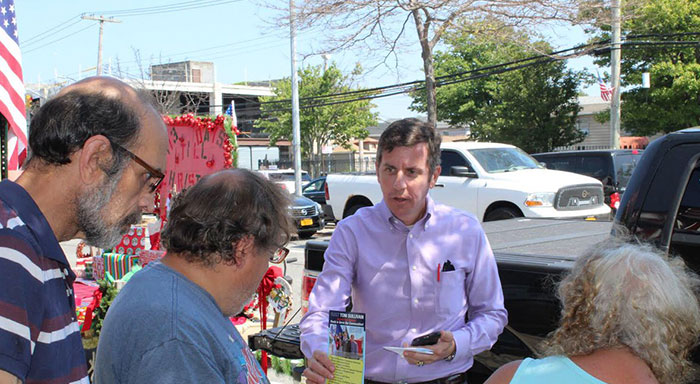 This marks the first time Sullivan is running for public office.

By Michael V. Cusenza
Like so many proud sons of the Peninsula, Tim Sullivan grew up surrounded by stories of service.
He and his six brothers were raised on Clinton Walk, a narrow Irish enclave that seemed to be a Bob Beamon leap from Rockaway Point Boulevard, and a pebble’s skip from the Breezy Point Lighthouse or historic Kennedy’s Restaurant.
Tim’s dad served in the Vietnam War; two of his brothers graduated from the United States Military Academy at West Point. Mister Mastroda, a U.S. Army veteran, lived “directly across the street,” Sullivan recalled on Tuesday in a chat with The Forum. World War II Army vet Mr. Magalli, who survived the Battle of the Bulge, resided next door; Mr. Fulham, who participated in the Normandy Campaign, D-Day +2.
And then there was Mr. Schek, the treasured World War I vet of Clinton Walk.
“When I was 5, 6, 7 years old we used to gather in Mr Schek’s yard each Memorial Day and raise the Stars and Stripes,” Sullivan said, an audible smile slipping into his speech. “As I grew up learning more and more about my neighbors, I became more interested in serving my country.”
Sullivan eventually would go on to La Salle Military Academy in Oakdale, Long Island, and later earned two degrees at Mount Saint Mary’s University where he taught as an assistant professor of military science for the Reserve Officer Training Program.
Sullivan is a 25-year military veteran who has been responsible for the welfare of as many as 2,300 soldiers and civilian employees as commander of a detachment company and a battalion during three combat deployments to Iraq, Afghanistan, and Kuwait. He currently serves as a colonel in the U.S. Army Reserves where he is deputy commander of the 77th Sustainment Brigade at Joint Base—McGuire Dix in Lakehurst, N.J.
The married father of three grew up working at Brennan & Carr’s, his family’s restaurant in Marine Park, Brooklyn, absorbing the daily plight of the small-business owner in the Big Apple. Sullivan also has 23 years’ experience in the financial sector, working in capital markets and investments.
While this year’s State Senate District 15 Republican Primary is his first official foray into politics, Sullivan said that he has been approached to run for office “several times” over the course of the last 16 years.
“My political philosophy has always been: If you’re going to represent the people, you’ve got to walk in their shoes,” he posited.
Sullivan has been endorsed by the Republican and Conservative parties. He laments the current state of politics—local or otherwise.
“It’s unacceptable the way we treat each other,” he noted. “Nothing gets done and the people pay for it. I think I can bring a level-head to the game—get people working in a positive direction toward a team goal.”
Forty years later and you can still hear Clinton Walk in Tim Sullivan’s cadence. That’s where he learned about life. That’s where he became enthralled with service.
“I hope I can bring some level of honesty and dignity back to public office,”Sullivan said.