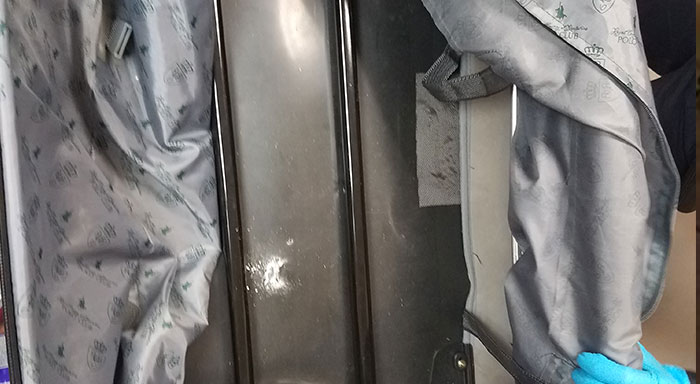 The narcotics were hidden in a false bottom in the suitcase.

By Forum Staff
Customs cops at John F. Kennedy International Airport recently caught a passenger attempting to smuggle a large amount of cocaine into the city, according to U.S. Customs and Border Protection officials.
On Tuesday, Aug. 21, CBP officers intercepted Jazmin Alexus Jones, a U.S. citizen, arriving from Port of Spain, Trinidad. During her examination, investigators detected that the bottom of Jones’s suitcase felt unusually thick. CBP authorities escorted Jones to a private search room where a false bottom was discovered in the suitcase; it contained a powder that tested positive for cocaine.
The white stuff weighed approximately 5 pounds, with an estimated street value of $75,000. Jones was arrested for the importation of a controlled substance and turned over to U.S. Department of Homeland Security Investigations agents.
“This seizure demonstrates the vigilance and dedication demonstrated daily by CBP officers at our port of entries while keeping these dangerous narcotics off the streets of our communities,” said Frank Russo, CBP’s acting director of the New York Field Office.