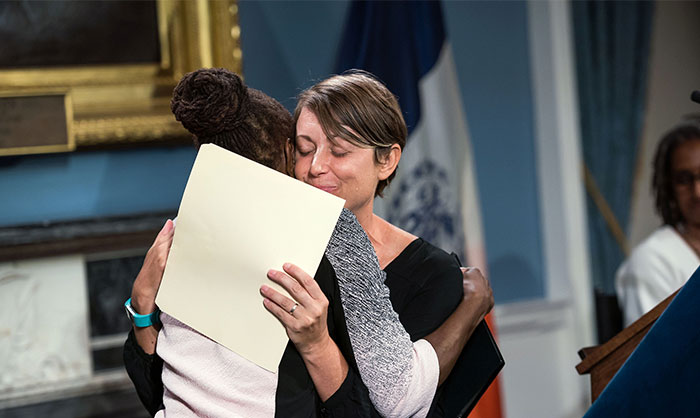 By signing Executive Order No. 36 on Friday, Mayor Bill de Blasio launched the Mayor’s Office to End Domestic and Gender-Based Violence to, as the administration put it, enhance the City’s strategic response to intimate-partner violence, family violence, sexual assault, stalking and human trafficking.

The executive order also mandates a citywide, coordinated response to address domestic and gender-based violence that, according to the administration, will prioritize developing and expanding services for survivors of sexual assault, family violence and trafficking; launching a five-borough outreach team, and enhancing trainings for City agencies and community stakeholders; creating opportunities for data collection and information sharing; and develop a legislative agenda for domestic and gender-based violence.

“New York City is a place where no one should feel afraid to seek help,” said Deputy Mayor for Health and Human Services Herminia Palacio, M.D. “With this executive order, the City is defining domestic and gender-based violence in the widest possible way because domestic violence, sexual assault and trafficking are interrelated crimes of power and control. If we can see gender-based violence for what it is and name it, we can help survivors come forward without shame. Through this expansion, we’re bringing the tools and resources of government under one roof, ensuring better coordination of City resources and increasing services so victims and survivors of sexual assault and trafficking can receive timely and adequate support.”

According to the administration, the expansion of ENDGBV’s mission would provide the authority to the ENDGBV to coordinate services, create policy and interventions, and develop citywide system responses to gender-based and domestic violence issues. Domestic violence is one part of a larger continuum of issues related to gender-based violence, the City noted, which includes intimate partner violence, family violence, sexual assault, stalking, and human trafficking. These issues all require comprehensive, coordinated, multi-agency responses, policies, and programs, and a lead office overseeing efforts. Currently, the administration pointed out that responses to incidents in these areas are largely criminal-justice focused.

De Blasio added that he’s “proud to sign this executive order, which significantly expands our work to combat domestic violence and help victims of sexual abuse and human trafficking. We are sending a clear message to all survivors that they are not alone and we encourage them to speak out and stand up.”