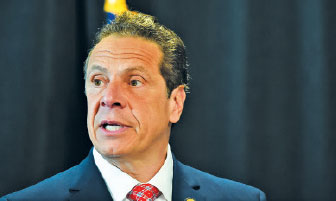 By Forum Staff
Governor Andrew Cuomo on Thursday announced continued efforts to raise awareness of the dangers of opioids—including fentanyl and synthetic marijuana.
As part of these efforts, a joint letter from the Commissioners of the State Education Department, Department of Health, and the Office of Alcoholism and Substance Abuse Services is being sent to school districts detailing the risks associated with these drugs and reminding them of the resources offered by the State to educate students and communities.
Injection drug use among high school students doubled from 2005 to 2015; and in 2017, more than 6 percent of high schoolers reported having used synthetic marijuana, according to the State. As use of these drugs among young people in New York continues to rise, Cuomo said he’s urging school districts to take action to address the ongoing crisis.
“We will continue to bolster our efforts to keep this poison out of the hands of our children,” the governor added, “and I encourage schools to join us in this fight by using the free resources available to them to keep students healthy and safe.”
U.S. Food and Drug Administration-approved fentanyl can be administered appropriately as an anesthetic during medical procedures and under close medical supervision. However, Cuomo noted that new forms of illicit fentanyl are being sold illegally or are being mixed with heroin and other drugs, which increases their potency and the risks of overdose or death.
Synthetic marijuana is illegal and is marketed specifically to young people under a variety of eye-catching names and colorful, graphic packaging. Synthetic cannabinoids consist of plant materials sprayed with unknown chemicals and despite sometimes being referred to as “synthetic marijuana,” do not contain marijuana.
“Synthetic cannabinoids can cause intense hallucinations, psychotic episodes, kidney failure, respiratory illness, and can be life-threatening,” the officials wrote in the joint missive to the school districts. “Users may have suicidal thoughts and can maim, seriously injure, or even kill, themselves or others while under the influence of these man-made substances.”
The letter also contains information about the opioid overdose reversal drug naloxone, and encourages schools to have naloxone on hand to administer to students in cases where opioid overdoses are suspected.
“The role that teachers and school staff play in a student’s life cannot be underestimated, and by equipping them with information on these deadly drugs we are putting them in a position to potentially save a life,” said State DOE Commissioner MaryEllen Elia.