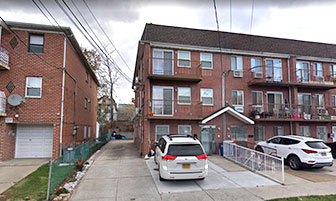 The birthing center is located on 161st Street in Flushing.

By Forum Staff
A Flushing woman has been charged with attempted murder in a crazed knife attack on three infants, a father, and another female worker on Friday ata birthing center on 161st Street, according to Queens District Attorney Richard Brown.
Yufen Wang, 52, was arraigned Monday evening on a criminal complaint charging her with five counts of second-degree attempted murder and fourth-degree criminal possession of a weapon. She was remanded and ordered to return to court on Oct. 19.
According to charging documents, Wang, a caregiver who worked at the center, began attacking a 63-year-old female fellow employee around 3 a.m. on Friday. For no apparent reason, Wang slashed and stabbed the baby girls and when one of the fathers, Meng Xu, 31, spotted her and tried to stop the knife-wielding woman, Wang stabbed him in the leg and wrist. The female co-worker sustained knife wounds to her face, chest, and legs.
According to the complaint, Wang’s wild stabbing spree left a 22-day-old girl with slashes to her face, chest and ear; a 33-day-old infant girl sustained injuries to her abdomen and back; and the youngest of the victims, just 13 days old, suffered knife wounds to her abdomen, face, and chest.
Cops found two knives—one on the first floor, which was used to attack the victims. A second knife was recovered in the basement, where Wang was apprehended with what appeared to be self-inflicted wounds to her neck and wrist.
Brown noted that Wang “was hired to care for and protect the infants, [yet] sadly she was the danger.”
If convicted, Wang faces 5 to 25 years in prison.