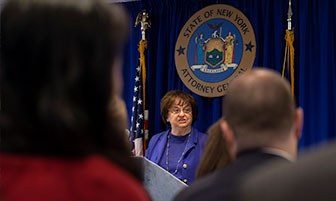 “These companies sought to line their own pockets by taking advantage of students who were simply trying to pay for their education,” AG Underwood said.

By Forum Staff
Nine student loan debt-relief companies, their financing firm, and two individuals with leadership roles in several of the companies are being sued for allegedly fraudulently, deceptively, and illegally advertising, marketing, offering for sale, selling, and financing student debt-relief services to consumers nationwide, including thousands of New Yorkers, according to State Attorney General Barbara Underwood, who filed the suit on Thursday.
The student loan debt-relief companies named in the lawsuit are Debt Resolve, Inc.; Hutton Ventures, LLC; Progress Advocates, LLC; Progress Advocates Group, LLC; Student Advocates, LLC; Student Advocates Group, LLC; Student Advocates Team, LLC; Student Loan Care, LLC; and Student Loan Support LLC. Debt Resolve, Inc., a New York company, is the majority owner of two of the other student loan debt relief entities. The two named individuals are Bruce Bellmare and Stanley Freimuth, the current and past CEOs of Debt Resolve, Inc. The financing company named in the lawsuit is Equitable Acceptance Corporation.
The complaint alleges multiple law violations, including that the defendants falsely claim to be affiliated with the federal government, make multiple misrepresentations to induce consumers to enroll in their services, and charge consumers illegal upfront fees and/or usurious interest rates. The defendants typically charge a consumer more than $1,000 for their services, which are available for free through the federal government or the consumer’s student loan servicer, according to the complaint.
Additionally, the suit alleges, the defendants then rely on “Student Loan Advisors” to sell student loan debt-relief agreements to consumers by phone. Despite holding themselves out as being knowledgeable about student loans, the so-called Student Loan Advisors are in reality telemarketers with no specialized experience or expertise, who sell virtually identical student loan debt-relief agreements to borrowers using the same sales scripts and pitches. Student Loan Advisors repeatedly make false and deceptive misrepresentations to consumers such as:
• telling borrowers that they are from the federal government, are a part of the federal student loan program, are working with the federal student loan program, or are working with a federal student loan servicer – when in fact, they are not affiliated with the federal government or student loan servicers;
• telling borrowers that they cannot enroll in the debt-relief services offered on their own – when in fact, borrowers can work directly with their servicers or use the Department of Education website to obtain student loan debt-relief services at no additional cost; and
• telling borrowers that they can eliminate their student loan debt by making a number of payments to one of the defendants – when in fact, making these payments will not reduce, let alone eliminate, their student loan debt.
The lawsuit seeks injunctive relief, a declaration that defendants’ contracts with borrowers are null and void, restitution, damages, disgorgement, penalties, and costs.
“These companies sought to line their own pockets by taking advantage of students who were simply trying to pay for their education,” Underwood said.
New Yorkers’ student loan debt is estimated at $86.54 billion, according to a 2017 Consumer Financial Protection Bureau report. The U.S. DOE estimates that 92-percent of all outstanding student loans are federal student loans.