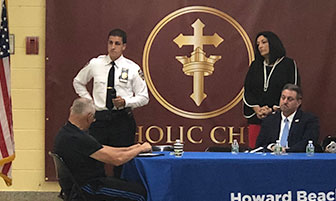 By Michael V. Cusenza
Crime in the 106th Precinct has ticked up over the last four weeks, with property crimes—auto-related offenses, specifically—leading the way, according to the command’s top cop and the latest available City Police Department statistics.
“We’re not taking robberies, we’re not taking murders, thank God,” Deputy Inspector Brian Bohannon, the precinct’s commanding officer, said on Tuesday at the Howard Beach Lindenwood Civic meeting. “But we are seeing property crimes.”
Overall crime is up 13 percent compared to the same 28-day period last year. Both grand larceny and grand larceny auto have jumped 25 percent.
Bohannon said property theft, especially in vehicles parked along Shore Parkway, the Belt Parkway, and the Conduits, is driving up the most recent numbers. Thieves are actually damaging cars—breaking windows, etc.—to gain access and pilfer items of value.
“Please just take your belongings with you when you leave your car,” Bohannon said.
The commander also cautioned that thefts of tires and rims, especially those on new model Honda Accords and Infiniti autos, are slightly on the uptick. Bohannon pledged to tackle the issue, noting that his officers have been coordinating lately with the department’s Auto Crimes Division.
A Queens community responder recruiting for City Community Emergency Response Teams was another featured speaker at Tuesday’s meeting.
The CERT program, which started in 2003, is composed of volunteers that receive training from a number of the city’s elite emergency first responders. After completing training, CERT volunteers support their local communities by assisting City agencies that prepare for and respond to emergencies.
Howard Beach resident Sincede Savoca, who completed the CERT volunteer training program in March, said Superstorm Sandy and its aftermath inspired her to join the Queens team.
“When you’re not prepared for an emergency, you feel lost,” Savoca said.
Savoca noted that her plan is to recruit a team over the next few months. Interested parties should call (347) 998-3303 for more information.