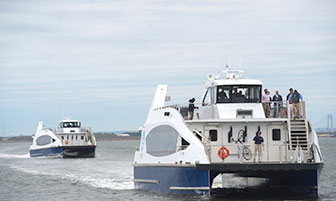 Ulrich wants the City EDC to adopt a student discount program modeled after the MTA.

By Forum Staff
The City Economic Development Corporation should offer students free and reduced NYC Ferry fares, Councilman Eric Ulrich (R-Ozone Park) wrote on Friday in a letter to EDC President James Patchett in which he urges the agency to adopt a student discount program similar to the one granted by the Metropolitan Transportation Authority.
“Since NYC Ferry’s launch last year, I have been approached by a number of constituents who have expressed the need for a student discount program,” Ulrich said, noting that only seniors and people with disabilities are eligible to receive reduced NYC Ferry fares.
The popular ferry system, which opened on May 1, 2017, is not integrated with MTA buses and trains. So families with students that rely on both ferry and MTA service to get to and from school wind up paying two separate fares.
And that’s not fair, Ulrich added.
“New York City public schools are open 180 days per year. Families with students that currently depend on both NYC Ferry and MTA service are spending $990 more annually than those that rely solely on MTA service,” the councilman noted. “Oftentimes, the added financial burden deters students from utilizing the more efficient ferry service, adding an hour to their commute to save money.”
Ulrich said that he “wholeheartedly” believes that students “deserve” a discount.
“Nearly 30 percent of all New York City students are living below the poverty line,” the councilman noted. “Low-income families have greatly benefitted from the MTA’s program, which provides more than half-a-million students with free and/or discounted MetroCard rides during specific hours on weekdays.”