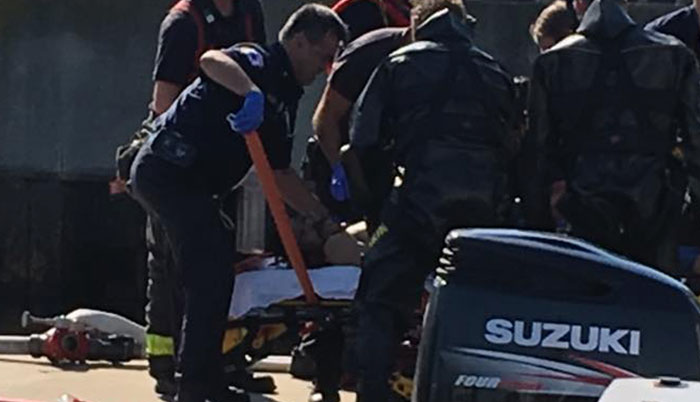 A pair of fishermen was swept off a Breezy Point jetty on Saturday.

By Michael V. Cusenza
One fisherman died and another was hurt on Saturday after violent waves walloped a Breezy Point jetty, sending both into Jamaica Bay, according to the City Fire Department and published reports.
Good Samaritan boaters managed to pull one of the men onto their vessel where he received medical attention from firefighters. Both were rushed to the pier at Kingsborough Community College, then transported to Coney Island Hospital.
“We received a call for two people in the water. When we arrived on scene, one individual was on a civilian boat already. The second person was still in the water, but the good Samaritans were holding onto them to stop them from drowning,” said FDNY Lt. Steve Szewczyk. “We secured the individual in the water on a board and had the civilians hold them while we began treating the individual on the boat. NYPD arrived on scene and dropped two divers in to help get the person out of the water. EMS took over care once we brought them back to land.”
The identities of both men were not made public.