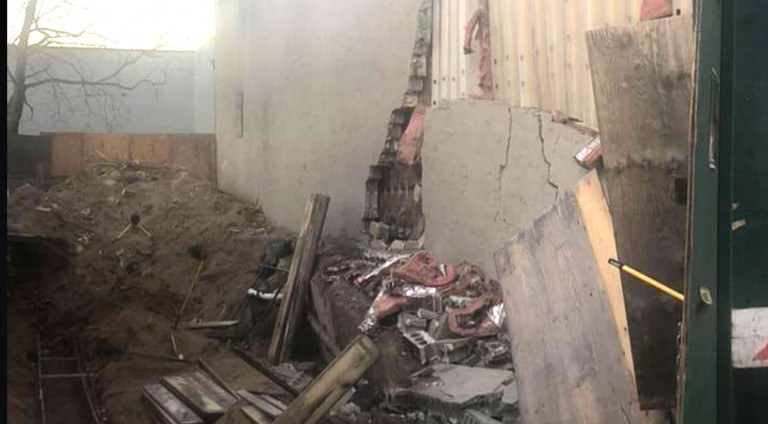 The Cross Bay Boulevard building started to crumble on Friday.

By Michael V. Cusenza
The City was forced to shut down a popular Ozone Park pet supply shop after an accident at a neighboring construction site on Friday triggered a partial collapse of the Cross Bay Boulevard store.
The critters inside Animal Pantry were safely removed over the weekend by City Department of Buildings personnel after the agency issued a vacate order due to crumbling sections of walls and the roof. No one was injured in the incident.
“We do not know what we are dealing with yet, but we do know that we cannot open until further notice,” ownership wrote in a Friday post on the Pantry Facebook page.
According to DOB and Pantry owners, inspectors were called to the scene on Friday by City Councilman Eric Ulrich (R-Ozone Park) after a section of the side wall of the building collapsed onto a construction site next-door on Albert Road, where excavation and foundation work were ongoing. Building inspectors were called back to the scene on Sunday after receiving reports that an additional portion of wall had collapsed. They found that a section of roof joists and parapet wall located directly above the collapsed wall had also toppled.
Inspectors determined on Sunday that despite the latest development, the rest of the building is not in danger of collapse, and there is no immediate hazard to the public.
The Buildings Department issued violations to the general contractor working at the Albert Road parcel for a failure to safeguard the construction site, and a full stop work order to the site as a result of the incident. Additionally, DOB has ordered the general contractor to secure the site, backfill the excavation work next to Animal Pantry, and perform any work required to prevent any additional movement of the building.
The owners of Animal Pantry praised the councilman for his quick reaction.
“Eric Ulrich came through for us,” they wrote on Facebook on Sunday. “He got in touch with [the Emergency Response Team] at DOB. They came in, assessed the building and let us in. ALL OUR ANIMALS ARE NOW RESCUED AND SAFE. Thank you to everyone for your concern. We will now deal with the rest of this mess, our building is still collapsing, but our animals are safe.”