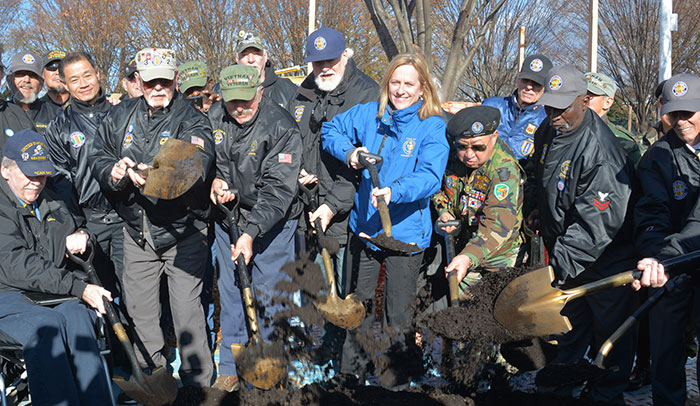 Photo Courtesy of the Office of the Queens Borough President

The memorial is slated to be completed in fall 2019.

By Forum Staff
Borough veterans joined civic leaders, elected officials, and the City Parks Department on Thursday in Elmhurst Park to break ground on the Queens Vietnam Veterans Memorial, the first borough-wide remembrance to honor all Queens residents who were either killed in action while serving in the Vietnam War, or served in the war and are officially listed as “Missing in Action.”
Queens Borough President Melinda Katz noted that construction of the memorial has been long sought after by Queens veterans who have wanted a borough-wide monument to recognize the sacrifices made by hundreds of Queens residents and their families during the Vietnam War. The $2.85 million in funding secured by Katz is enough to fully fund the design and construction of the memorial.
The late Pat Toro, former president of Vietnam Veterans of America Chapter 32 and a Marine Corps veteran, was a vocal and persistent supporter of the project before he died in 2014. Chapter 32 has followed Toro’s lead by continuing to seek the necessary funding for the memorial, Katz added.
“To our veterans of the Vietnam War, we know the sacrifices you made, the sacrifices your families made. The Queens Vietnam Veterans Memorial will help ensure generations never forget, and remind our borough, city and nation to remain ever grateful,” the borough president said. “It’s been 10 years since Pat Toro first dreamed up the idea for a Vietnam Veterans Memorial, and now that dream will soon become reality. Because of his leadership and that of Vietnam Veterans of America Chapter 32, the service members who made the ultimate sacrifice during and as a result of that conflict will have a fitting and dignified tribute right here in the borough they proudly called ‘home.’”
The memorial was designed by NYC Parks in consultation with VVA Chapter 32. It is intended to be a contemplative space that honors those Queens residents who lost their lives during the Vietnam War, Katz said.
Two semi-circular granite walls will flank the space. One will bear the name of the memorial, the five crests of the military and the Vietnam Service Medal, which is awarded to all military members who served in the Vietnam War. On the inside of this wall will be an etching of bamboo, which represents a common element of the Vietnam War.
The second wall will offer a history of the Vietnam War that will list key events and dates. This wall will also bear the names of Queens residents who served in the Vietnam War who were either killed in action or are listed as missing.
The names of fallen will be placed strategically so that they receive sun most of the day, Katz noted. The granite walls, as well as the existing flagpole, will both be illuminated at night. Additionally, there will be a map of Vietnam on the floor of the memorial that will depict key Vietnam War locations.
A separate plaque will also be installed that will recognize Toro and fellow Vietnam War veterans from Queens who died here at home due to effects of the war, such as exposure to Agent Orange.