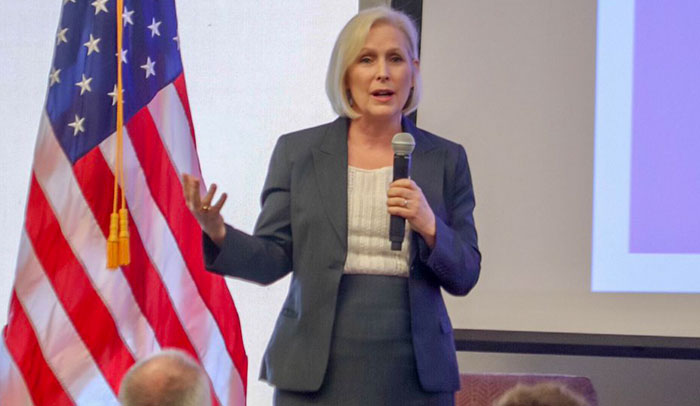 “We have a responsibility to ensure our airports are not poisoning the water in our communities,” Sen. Gillibrand said.

By Forum Staff
A New York senator has slammed the Trump administration for “dragging its feet” on enforcing a new law that would help end the use of dangerous chemicals at airports across the Empire State and the country that poison local waterways.
Senator Kirsten Gillibrand (D-N.Y.) on Tuesday called for the immediate implementation of the new measure that would finally bring an end to the use of per- and polyfluoroalkyl substances, a toxic group of chemicals that are the primary ingredient in firefighting foams utilized at New York airports. According to Gillibrand, PFAS can seep into groundwater, contaminating the drinking water supplies for nearby communities. The chemicals are linked to cancer and other serious health problems, the senator added, and the continued use of PFAS at airports poses a serious health risk.
According to a study conducted by the Environmental Working Group, as many as 110 million Americans are drinking from water supplies contaminated by PFAS; and according to the Green Science Policy Institute, 75 percent of PFAS contamination sites are likely related to firefighting foam use.
Prior to the Federal Aviation Administration Reauthorization this year, commercial airports were required to use PFAS in firefighting foams. Airports frequently use firefighting foam for drills and training exercises. Gillibrand successfully fought to pass a new law as a part of the FAA Reauthorization that eliminated the requirement, allowing U.S. airports to use alternative, industry-accepted firefighting foam.
Although the law passed two months ago, the FAA still has not implemented the new regulations, the senator noted.
“One of the biggest reasons this chemical keeps leaking into our water is because it’s one of the main ingredients used in the firefighting foams at airports,” Gillibrand added. “This was an arbitrary regulation, and I fought to pass a law that allows airports to use firefighting foams without PFAS. We have a responsibility to ensure our airports are not poisoning the water in our communities, and I’m calling on the Trump administration to immediately implement this law and protect our communities from these dangerous chemicals.”
Gillibrand sent a letter on Tuesday to acting FAA Administrator Dan Elwell requesting that the agency: Provide specific actions the FAA plans to take to complete the switch to PFAS-free foam and a proposed timeline for each action; make all commercial airports in the U.S. aware of the change in requirements; prohibit the use of PFAS-containing foam for training purposes; and end the annual requirement to test firefighting foams containing PFAS by directly spraying on them onto the ground.