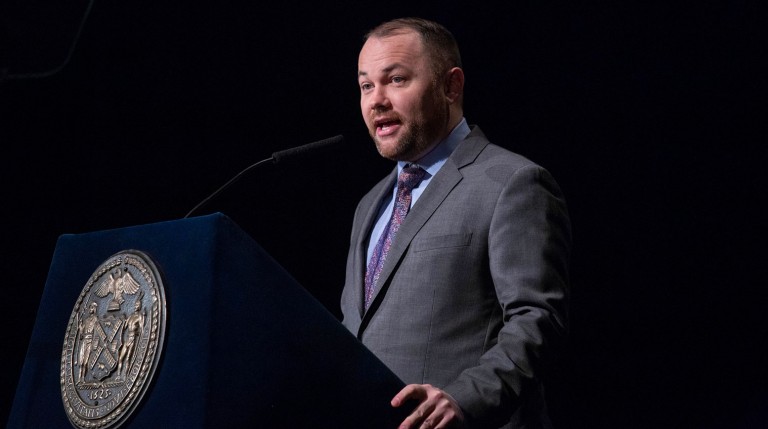 By Michael V. Cusenza
The City should control its own transit destiny. In order to achieve this authority, the City must have control over its public transportation system, according to City Council Speaker Corey Johnson, whose headline-stealing State of the City address made the case for municipal command of buses and subways in the five boroughs.
Johnson chose the Mainstage Theater at LaGuardia Community College in Long Island City for his debut SOTC; and he chose transportation as the main theme of a unique address heavy on style and substance.
“Transit is at the heart of who we are as a City. And transit is at the heart of the crisis we’re in right now,” the speaker said.
The speaker’s speech was based on “Let’s Go: A Case for Municipal Control and a Comprehensive Transportation Vision for the Five Boroughs,” Johnson’s 104-page report that outlines his idea for revolutionizing mass transit in NYC.
“It’s time for the City to take back control of the subway and buses so that we can establish and implement our own transportation priorities,” Johnson demanded. “This report closely examines the problems associated with the current MTA governance structure and proposes a detailed plan, including proposed operating and capital budgets and new revenue streams, for a City-controlled entity to run our mass transit system. Recognizing that failures of government come from failures of accountability and responsibility, the report proposes three key elements for the new system: accountability, transparency, and oversight.”
Johnson’s vision even involves a new name for New York City’s mass transit system: the BAT.
“The State must transfer New York City Transit, the Manhattan and Bronx Surface Transit Operating Authority, the MTA Bus Company, the Staten Island Rapid Transit Operating Authority, MTA Bridges and Tunnels, and a portion of operations at MTA Headquarters to a new entity controlled by the City—Big Apple Transit,” he posited.
Johnson’s ambitious plan calls for: one person in charge. Under the BAT, that would be the mayor. Riders and taxpayers would know who controls the system and who to hold accountable.
Johnson noted that the BAT’s structure would be modeled on the Water Board. The BAT would resolve issues of political interference and a lack of clear financial support by taking a page from the operations of what Johnson characterized as “a successful, capital-intensive municipal operation: the City’s water system.” Like that system, BAT’s operations would be part of the City’s budget and subject to the same oversight and planning process that other City agencies currently undergo. Similarly, BAT’s financial plan would also be periodically reviewed by a third party engineering firm to ensure that these financial plans provide sufficient resources to keep the system viable over the long-run. These steps will prevent any future backsliding in maintenance and investment to guarantee New Yorkers a reliable transit system, according to Johnson.
“If you think solving our transit crisis is too hard, look around when you leave here today. Take a look at Queens. Look at Brooklyn. At the Bronx. Upper Manhattan. The subways built that. New Yorkers built that. Immigrants built that,” Johnson concluded. “We are the greatest city in the world.”