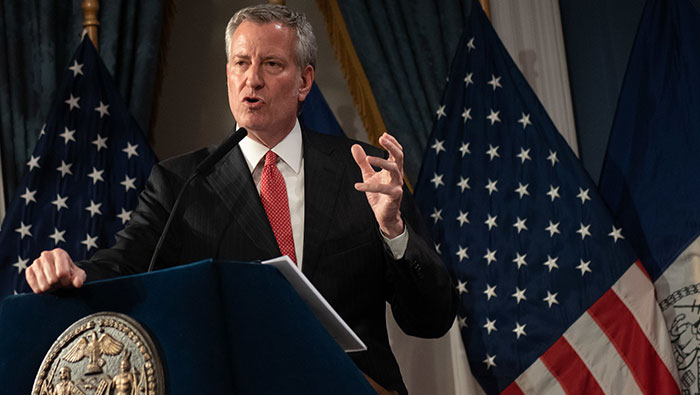 “This budget, you will see, is for a new era that we’re entering into where we will focus on fiscal caution, that we will make sure that savings is even more a part of what we do going forward,” Mayor de Blasio said.

By Michael V. Cusenza
Mayor Bill de Blasio hailed the $916 million in savings achieved in the Fiscal Year 2020 Executive Budget, even though the City spending plan increased by more than $3 billion over FY 2019.
“It’s a big number, but I think it’s worth it,” Hizzoner said Thursday of the $92.5 billion agenda. “We’re New Yorkers. We are people who demand a lot. This is literally the culture of this place and who we are, right? We’re a place that is intense and active all of the time and people want a lot—they want the best police force on earth, they want the best fire department, they want the best public health department. It’s a 24/7 city. There’s so much that we spend on that people here demand. And we’re a union town and we believe in the labor movement and we believe in giving people fair wages and benefits, and all of that adds up. I think it works, I really do. I mean, we look at the formula of New York City, it may have taken a while for us to, you know, pull it all together and get out of some of the lean years, but, right now, what’s going on in New York City is working. And it’s a heavy investment model, but it yields a lot of great results for every-day people.”
According to the mayor, the FY2020 budget: achieves $916 million in savings over FY19 and FY20, exceeding the City’s original target of $750 million in order to meet over $150 million in additional critical needs identified since February. Of the $916 million in savings, $629 million were achieved through the administration’s first ever Program to Eliminate the Gap, a mandatory savings program that includes agency budget cuts, programmatic cuts, and a hiring freeze.
“This budget, you will see, is for a new era that we’re entering into where we will focus on fiscal caution, that we will make sure that savings is even more a part of what we do going forward,” de Blasio said. “And there will be some investments, but they will be limited.”
The plan maintains funding for more than $300 million in cuts and unfunded mandates from the State’s Executive Budget related to vital services and recently enacted State legislation, de Blasio noted, while it covers additional critical needs to keep the City “in a strong fiscal standing” and makes strategic investments in programs that “build upon continued efforts to make New York City the fairest big city in America.”
The strategic investments include:
• Retrofitting City buildings to make them more energy efficient ($60 million).
• Ramping up for the 2020 Census to ensure a fair count of New York City residents, which will secure fair representation in Congress and the city’s fair share of federal funding ($22 million).
• Improving EMS response times by expanding the “Fly Car” program in the Bronx ($15 million).
• Baselining funding for Bridging the Gap to provide support for students in shelters ($12 million).
• Emergency repairs at NYCHA community centers to refurbish pipes, air conditioning and heating infrastructure ($6 million).
The City Council was not thrilled with the mayor’s executive spending plan.
“NYC spends too much and saves too little. @NYCMayorsOffice unveiled a $92.5B budget today.
@BilldeBlasio spends taxpayer money like a drunken sailor. @NYCCouncil really needs to be the adult in the room and offer some fiscal sanity before it’s too late!” Councilman Eric Ulrich (R-Ozone Park) tweeted.
In a joint statement, the council indicated that it “is disappointed that Mayor de Blasio has failed to fund many significant citywide council priorities in the Fiscal 2020 Executive Budget, including many social service programs as well as $250 million in reserves. The reserves are necessary to protect the City in the event of an economic downturn and should not have been excluded in the Executive Budget. This is the fiscally responsible path for our city, and the council is once again demanding we prioritize reserves. And by not funding vital services, the de Blasio administration is engaging in the same ‘budget dance’ that it had once pledged to end. This is completely unfair to the nonprofits who run these programs and who are now unable to plan their future. This is unacceptable, and they deserve to be treated better than this.”