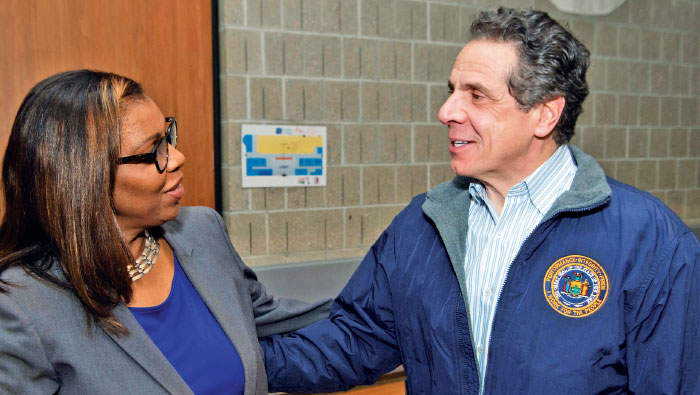 As we’ve noted before, there are times when our elected officials deserve kudos and congratulations in this space. And there are times when they deserve the polar opposite of kudos and congrats.
This week is one of those unique instances where the same elected officials deserve both.
Follow us.
Congratulations to Gov. Andrew Cuomo for signing legislation on Monday to ban offshore drilling in New York waters. According to the governor, the legislation will bar the state from granting permits for drilling, or oil or gas exploration in offshore areas controlled by the State. The ban will protect New York’s waters and coasts by making it more difficult for oil and gas drilling to occur close to coastal New York, even in waters controlled by the federal government. In addition, the legislation prohibits the leasing of State-owned underwater coastal land that would authorize or facilitate the exploration, development, or production of oil or natural gas.
Cuomo said he signed the bill in direct response to the Trump administration proposal to open U.S. coastal areas to drilling. (Remember this sentence. It might be handy later.)
And kudos to State Attorney General Tish James and her phalanx of attorneys who recently traveled to the U.S. Supreme Court for oral arguments before the nine justices regarding the multi-state lawsuit challenging the Trump administration’s decision to add a citizenship question to the 2020 census questionnaire.
However, we must also reprimand these experienced politicians. Here’s why: President Donald Trump on Monday decided to add James and Cuomo to his lengthy list of Twitter targets; this time regarding the National Rifle Association.
“The NRA is under siege by Cuomo and the New York State A.G., who are illegally using the State’s legal apparatus to take down and destroy this very important organization, & others. It must get its act together quickly, stop the internal fighting, & get back to GREATNESS – FAST!”
Instead of ignoring this nonsense, Cuomo and James decided to bask in the national spotlight by releasing separate statements on the matter.
“President Trump: Since December 2012 there have been 2,029 mass shootings in the United States. 74,600 Americans have died from gun violence since you were elected. You have done nothing but tweet about it,” Cuomo said. “The scourge of gun violence is a national crisis plaguing our country and killing our children. It demands action. And action, Mr. President, requires true leadership. The only thing illegal is the gun lobby’s insurance scheme. Unlike you, President Trump, New York is not afraid to stand up to the NRA. I will continue to fight for the children of this state. As for the NRA, we’ll remember them in our thoughts and prayers.”
James said she “is focused on enforcing the rule of law. In any case we pursue, we will follow the facts wherever they may lead. We wish the President would share our respect for the law.”
However tantalizing, Cuomo and James should have taken the high road and let Trump’s Twitter post land with a thud. Instead they stooped down to his level, where kudos and congratulations are foreign phrases.