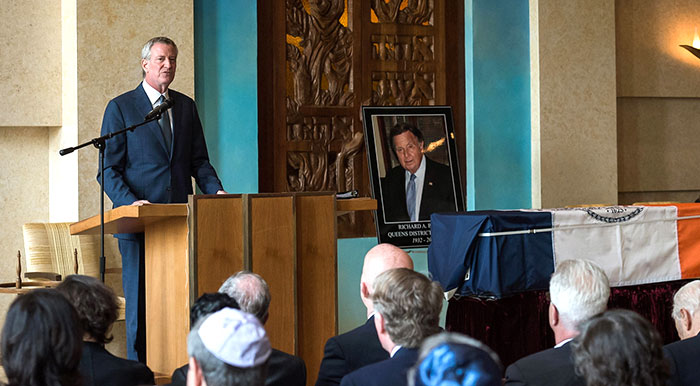 “We mourn but we appreciate with all our hearts what he has left us. On behalf of all 8.6 million New Yorkers, may Richard Brown’s memory be a blessing,” said Mayor de Blasio at Brown’s funeral.

By Michael V. Cusenza
Richard Allen Brown, Queens County district attorney for the last 28 years, died on Saturday in Meadow Ridge palliative care facility in Redding, Conn. He was 86.
Brown succumbed to complications of Parkinson’s disease following a protracted battle with the neurodegenerative disorder. His rapidly declining health forced him to announce that he would resign his post effective June 1, 2019.
On June 1, 1991, while an associate justice of the Appellate Division, Second Department, Brown accepted Gov. Mario Cuomo’s appointment as the district attorney of The World’s Borough.
“My father recognized Judge Brown’s brilliance when he appointed him…and 27 years later was proven right,” Gov. Andrew Cuomo said. “Judge Brown fought successfully to create safer neighborhoods and reduce crime in his borough. He took on the scourge of opioid addiction, fought to protect domestic violence victims, worked to end human trafficking and so much more. We are forever indebted to Judge Brown for his service to this state; he will be sorely missed.”
Brown subsequently was elected to a full four-year term as Queens’ top law enforcement official at the general election held in November 1991, and was re-elected at the 1995, 1999, 2003, 2007, 2011 and 2015 general election.
Born in Brooklyn, but raised in Queens, Brown received his bachelor of arts degree from Hobart College in 1953 and graduated from New York University School of Law in June 1956.
Prior to becoming a member of the judiciary in September 1973, Brown spent nine years serving in various legal positions on behalf of the leadership of the State Senate and Assembly, and at the 1967 State Constitutional Convention, and four years as the City’s legislative representative in Albany.
After serving as a judge of the Criminal Court for less than two years, Brown was appointed as supervising judge of the Brooklyn Criminal Court. In January 1976, he was designated as an Acting Justice of the Supreme Court of the State of New York.
It was during this unsettled, unnerving period in NYC history that Brown’s name became inextricably linked to one of the most notorious figures the Empire State has ever produced. On Aug. 11, 1977, Brown was the judge who presided over the arraignment of serial killer David Berkowitz, a.k.a. the Son of Sam.
“We mourn but we appreciate with all our hearts what he has left us. On behalf of all 8.6 million New Yorkers, may Richard Brown’s memory be a blessing,” said Mayor Bill de Blasio in remarks delivered at Brown’s funeral on Tuesday. “To his family, to his friends, to his colleagues, to all who knew him, to the people of Queens, to the people of this city—let’s remember Judge Brown, let’s try and live like Judge Brown.”
Brown is survived by his wife of 59 years, Rhoda, their three children Karen, Todd and his wife Monica, and Lynn and her husband Bruce; and his granddaughters Leah and Alana.