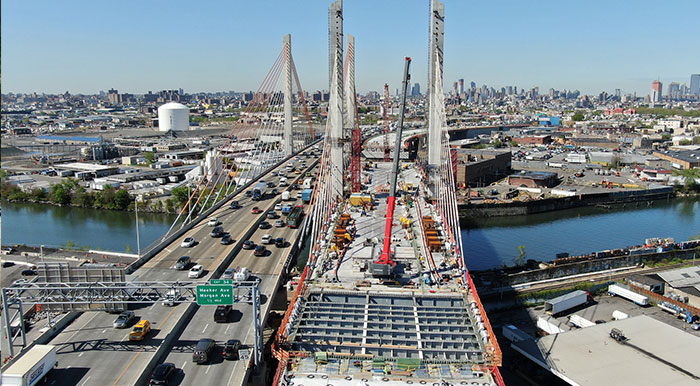 The Kosciuszko Bridge project has helped to support approximately 11,300 jobs in construction and related fields in the New York City metropolitan region, according to the administration.

By Forum Staff
The second span of the Kosciuszko Bridge will open in September 2019—four years ahead of schedule and on budget, Gov. Andrew Cuomo announced on Monday.
The bridge, which connects Queens and Brooklyn by straddling Newtown Creek, is part of an $873 million design-build construction project; it’s also the first new bridge built in the five boroughs since the Verrazzano-Narrows Bridge opened to traffic in 1964, Cuomo noted.
Once complete, the new bridge will encompass five Queens-bound travel lanes and four Brooklyn-bound travel lanes of the Brooklyn-Queens Expressway, plus a 20-foot-wide bikeway/walkway on the Brooklyn-bound span.
The project has helped to support approximately 11,300 jobs in construction and related fields in the New York City metropolitan region, according to the administration.
The Kosciuszko carries approximately 200,000 commuters daily. Currently, the Queens-bound bridge is carrying three travel lanes in each direction of the Brooklyn-Queens Expressway until the second, Brooklyn-bound bridge, is completed under a separate Phase II contract, which is valued at $318 million.
The first span of the Kosciuszko opened to traffic in April 2017, completing the $555 million first phase of the project and representing the single-largest construction contract in State Department of Transportation history, Cuomo noted. The spans of the former bridge were lowered to the ground through an energetic felling process in October 2017 in the first-ever implosion of a major bridge infrastructure using explosives in NYC. The first phase utilized 3,850 tons of U.S. manufactured steel.
According to the State, as the first cable-stayed structures in the five boroughs, the two spans will create a signature skyline between Queens and Brooklyn, and will help improve travel speeds on this segment of the BQE. The Kosciuszko also promises to eliminate delays by 65 percent on this segment of the BQE during peak hours though a few different measures, including:
• Standard driving lane widths—currently the lane widths on the main span are less than the required 12 feet for an interstate highway.
• Standard shoulder widths—currently there are no shoulders, so if a car breaks down on the bridge, a lane is automatically closed.
• Extra lanes in both directions.
• A reduced roadway incline, which will make it easier for trucks to maintain consistent speeds on the bridge. The new bridge is also 35 feet lower than the old one.
The project to replace the Kosciuszko utilizes Disadvantaged Business Enterprise goals established by the Federal Highway Administration. For both phases of construction, NYSDOT expects participation funding to total $113 million.
In December 2018, Sergeant William Dougherty Park opened in Greenpoint, on the Brooklyn side of the bridge. The public park was expanded and completely renovated as part of the Kosciuszko project and includes a playground, skate park, basketball court, handball courts, a water play area with spray showers and a comfort station.
The State has pledged that a new park will be completed on the Queens side in 2022. Streetscaping enhancements such as decorative lighting, tree plantings, and new sidewalks are also being placed on local streets within the project limits of the Kosciuszko.