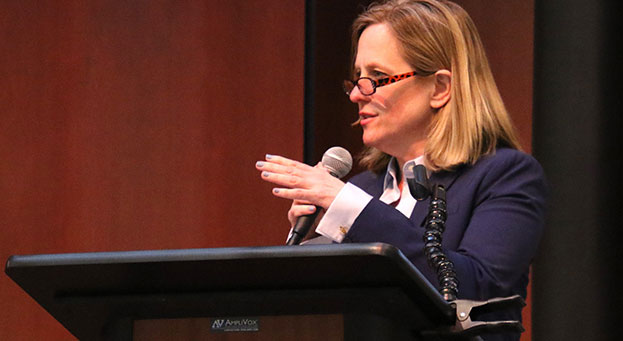 “If we’re serious about ridding our society of the scourge of gun violence everywhere, we must deconstruct the normalization of gun violence,” Borough President Katz said.

By Forum Staff
Borough Hall is set to host a town hall on gun violence in Queens on May 30 at 6 p.m., Borough President Melinda Katz and Public Advocate Jumaane Williams announced on Tuesday.
According to the elected officials, the summit will be a boroughwide open public forum for community groups, city agencies and law enforcement to discuss how to disarm violence in our communities, and to address gun violence as the public health crisis that it is—one that continues to impact youth, families and communities with devastating consequences.
According to City statistics, crime has dropped dramatically across Queens in recent decades, with both Patrol Borough Queens North and Patrol Borough Queens South having seen murders decline by more than 75 percent since 1990.
However, families are still losing loved ones to gun violence — either as the victim of a shooting or the perpetrator — every day. Through April, there were 43 reported shootings across Queens this year. Patrol Borough Queens North saw 18 of those shootings, up from seven through the first four months of 2018.
Despite the recent increase in shootings in some areas, the city has seen a precipitous decline in gun violence since the 1990s, which has been made possible in part because of the dedicated work of community-based anti-violence and youth support organizations across the borough — groups that strive to deconstruct the normalization of gun violence across neighborhoods. The May 30 Town Hall will stress the importance of empowering and assisting gun violence prevention efforts proven to save lives and strengthen communities on a daily basis, Katz and Williams noted.
“We cannot cure the epidemic of gun violence solely through policing and locking up those who run afoul of the law,” Katz added. “If we’re serious about ridding our society of the scourge of gun violence everywhere, we must deconstruct the normalization of gun violence. It is imperative that as a city, we direct our collective focus toward prevention through the promotion of peace and intervention, as well as increasing resources to investigate and prosecute those who traffic guns into our communities. At this borough-wide public forum, we will hear from leaders in government, law enforcement and dedicated community-based organizations throughout Queens on strategies that successfully steer our young people away from gun violence and toward paths of empowerment.”
Williams said, “We see the realities of horrific gun violence every day, on our screens and in our streets. Combating this pandemic means implementing strategies at all levels of government and in partnership with community groups doing the hard work of violence prevention and intervention on the ground.”
To that end, representatives from groups such as 696 Build Queensbridge, Fathers Alive in the Hood (F.A.I.T.H.), King of Kings Foundation, LIFE Camp, Inc., Rock Safe Streets – A Sheltering Arms Program and Transitional Services for New York, Inc. will discuss the successful initiatives that encourage people to be positive influences in their communities—strategies that, according to Katz and Williams, are helping to move forward a boroughwide priority on combating gun violence.
Anyone interested in attending is encouraged to RSVP at queensbp.org/rsvp or call (718) 286-2661.