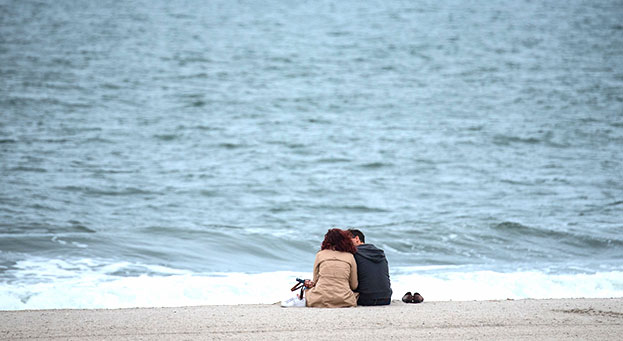 Rockaway Beach will open on May 25.

By Michael V. Cusenza
The East Rockaway Inlet maintenance dredging project, in which sand dredged from the East Rockaway Inlet Federal Navigation Channel was used to re-nourish and restore Rockaway Beach between Beach 92nd Street and Beach 105th Street, has been completed, allowing for the re-opening of this stretch of beach this summer, officials announced on Tuesday.
This section of the beach was closed to the public last year because of significant erosion after back-to-back nor’easters in March 2018.
The New York District of the U.S. Army Corps of Engineers awarded a contract for $10.7 million to Weeks Marine (Cranford, N.J.) to perform needed maintenance dredging of the inlet. The City contributed $2.7 million to pump the sand two and a half miles farther west along Rockaway Beach in order to restore the section of the beaches that were shuttered last year.
According to officials, the work, which began in March, also restores and ensures safe passage for both commercial and recreational vessel traffic through East Rockaway Inlet. USACE removed approximately 348,000 cubic-yards of sand from the inlet.
In addition, the New York District is now in the process of receiving the final approvals from USACE headquarters for the Rockaway & Jamaica Bay Reevaluation Report. This report will authorize the construction, at 100 percent federal cost, of new erosion control features (such as jetties or groins), additional beach-fill and reinforced dunes, as well as flood risk-reduction features on both the Atlantic and bayside shoreline of the Rockaway Peninsula.
The plan also calls for increased beach berm with 1.6 million cubic-yards of sand for initial placement, the extension of five groins already in place and the construction of 13 new groins—all designed to help reduce the risk from future coastal storms and provide additional resiliency for the residents of the community.
City beaches will open for swimming starting on Saturday, May 25 and remain open through Sunday, Sept. 8.
“Getting tons of sand onto Rockaway Beach in time for summer—and avoid a repeat disaster of prime time beach closures—required every level of government to dig in deep. And using the sand from the East Rockaway dredge was a win-win plan because it keeps open a vital channel and all of Rockaway Beach,” said U.S. Sen. Chuck Schumer (D-N.Y.). “I fought hard to secure the extra money Army Corps needed to dredge, and pushed the plan to use that sand to shore up the most eroded parts of the beach, which were closed last season. Kudos to Mayor [Bill] de Blasio and the Army Corps for working together to fix for this situation. No one wanted to have another partial beach shutdown again this summer—and now we won’t.”
City Councilman Eric Ulrich (R-Ozone Park) added, “This is great news—not only for the residents of the Rockaways, but also for the local business owners who suffered because of last year’s beach closure. I am looking forward to a wonderful beach season where people from all over the city can enjoy Rockaway’s beautiful beaches.”