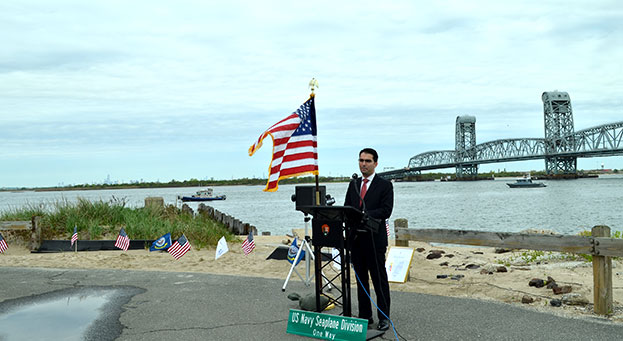 By Forum Staff
City Councilman Eric Ulrich (R-Ozone Park) recently hosted a commemorative ceremony at the Rockaway Coast Guard Station, complete with a military flyover, to celebrate the 100th anniversary of the world’s first transatlantic flight.
Contrary to popular belief, national icon Charles Lindbergh was not the first man to fly across the Atlantic Ocean. Five members of the U.S. Navy and the first U.S. Coast Guard pilot were the first to fly across the Atlantic—and their journey began right here in The World’s Borough. On May 8, 1919, three Navy seaplanes took off from Jamaica Bay, and, after a series of stops, one of those planes landed in Lisbon, Portugal.
“When I learned about the long forgotten story behind the world’s first transatlantic flight, I knew we had to bring the story out from behind history’s shadow,” Ulrich said last Wednesday.
Joined by members of the armed forces and relatives of the original flight crew, Ulrich unveiled a new street sign at Beach 169th Street at Rockaway Point Boulevard, which was co-named “US NAVY SEAPLANE DIVISION ONE WAY” in honor of the historic event.
“Thank you Councilman Ulrich for your tremendous leadership and for pulling this event together to truly commemorate what is not only a historic event for the Navy, for the Coast Guard [and for] New York City—but [also] for our nation and the world,” said U.S. Coast Guard Captain Jason Tama.
Additionally, in partnership with the Queens Historical Society and the Rockaway Artists Alliance, earlier this month, Ulrich announced a special month-long exhibit commemorating the flight. The exhibit, which was funded by Ulrich with a $7,000 grant, is free and open now through Sunday, June 2, at the T7 Gallery in Fort Tilden.
“Despite making national headlines, the world’s first transatlantic flight is an often forgotten piece of American history,” Ulrich added. “I encourage all of my constituents to check out the exhibit honoring a local legacy that has been lost for far too long.”