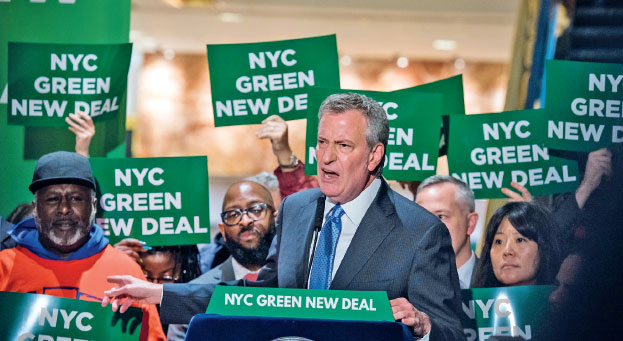 No place on Earth does political theater like New York City. Well, maybe D.C. But that’s largely a product of mind-blowing dysfunction.
This week, we honor Hizzoner for a career in political stagecraft and recent contributions to the bureaucratic arena thinly disguised as press events to trumpet services and plans to protect the five boroughs and their nearly 9 million inhabitants.
First, Mayor de Blasio trekked up to Lincoln Medical Center in the Bronx to unveil the NYC Care card. An estimated 300,000 New Yorkers are currently ineligible for health insurance, including people who can’t afford insurance and undocumented immigrants, and will be able to enroll in NYC Care. The $100 million program—one of two major components of the City’s plan to guarantee health care for every New Yorker—will be fully implemented across all five boroughs by the end of 2020.
According to de Blasio, when the NYC Care card becomes available in the Bronx on Aug. 1, residents will be able to use their NYC Care card to receive their own doctor, get preventative screenings and tests, and connect to a 24/7 service to help make appointments.
Yes, you read that correctly. The card will be available in the Bronx nearly three months from now. And the full NYC Care plan is scheduled to be implemented across the city by the end of next year.
So, why the May 2019 press conference for items that won’t be available for some time? As ludicrous as it may sound, our mayor is most likely prepping a 2020 run for the White House. And events such as the one at Lincoln provide free publicity for progressive programming that de Blasio can point to as a faux accomplishment should he make his presidential aspirations official later this month.
This brings us to Monday, when the mayor gathered “supporters” and the press inside the lobby at Trump Tower. (The event was scheduled for outdoors, but the weather would not cooperate.) What was de Blasio doing at the Donald’s monument to affluence and excess? Well he was wagging his finger threateningly, warning the President, his family, and his organization—via several dozen television cameras and smartphones—about the millions of dollars their properties will owe under new climate change legislation that requires large buildings in New York City to dramatically cut their greenhouse gas emissions.
“President Trump—you’re on notice,” de Blasio bellowed. “Your polluting buildings are part of the problem. Cut your emissions or pay the price.”
However, the painfully obvious campaign launch pad quickly found itself under siege by Trump supporters riding the infamous escalator, chanting and holding signs featuring such lighthearted observations as “Worst Mayor Ever.”
At one point, de Blasio simply could not ignore the noise.
“Clearly, the Trump Organization is a little sensitive to the fact that we’re calling them out for what they are doing to the climate and the way this building is a part of the problem,” he said, nervously. “But we will not back down. We don’t back down in New York City, do we?”
We also don’t take kindly to politicians using us and our fair metropolis to produce sham press conferences for political gain.
De Blasio’s delusions of presidential grandeur are so ridiculous that even the vaunted satirical news organization, The Onion, recently ran a “story” boasting the headline: “De Blasio PAC Spends $30 Million Urging Candidate Not To Embarrass Self by Running.” The post quotes fictitious PAC President Greg Zimmer as saying “We’ve launched a massive billboard campaign with slogans like ‘Jesus, Please Don’t Do This,’ ‘Come To Your Senses, Bill,’ and ‘No One Wants This.’”